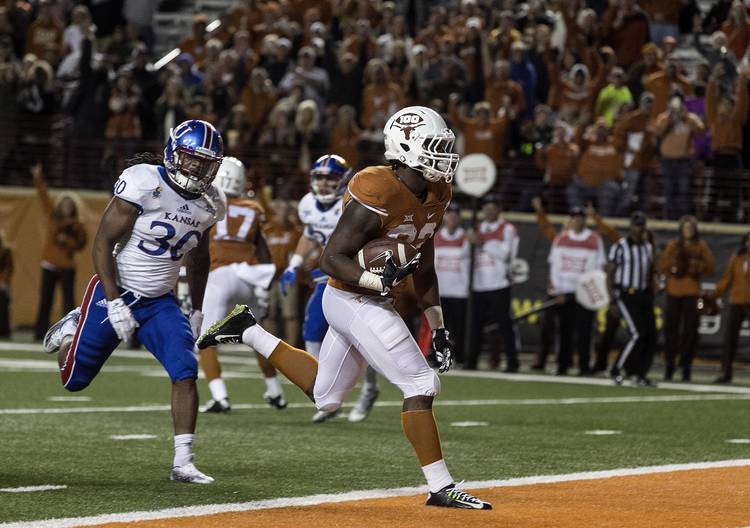 November 7, 2015 - Texas (33)D'Onta Foreman, running back, rushes into the endzone for a touchdown as Kansas (30) Tevin Shaw, safety, looks on during the second half of Big 12 action held at Darrell K Royal- Texas Memorial Stadium in Austin, Texas, on Saturday, Nov. 7, 2015. RODOLFO GONZALEZ / AUSTIN AMERICAN-STATESMAN

1. Will Texas get off to a quick start?

In three road games, opponents have outscored Texas 51-0 in the first quarter. And by now, it’s been hammered into dust that Charlie Strong’s Longhorns are winless when they don’t score first. That’s 0-11. So the first 15 minutes should be a good indicator of the shape this one will take. Key will be a quick start for quarterback Jerrod Heard, who this week said he’s putting the game on his shoulders.

2. Will D’Onta Foreman get more carries than Johnathan Gray?

Last week marked only the second time Foreman got more carries than Gray, the senior starter. Evidence suggests a shift is needed, as Foreman has rumbled for 100 yards — including a 93-yard touchdown against Kansas — three times in the last five games. His 6.9 yards per carry dwarfs Gray’s 4.0 average, though Gray is considered the better pass blocker. Foreman has had more than 10 carries in two games.

3. Will Peter Jinkens record a sack for the fourth straight game?

Jinkens has been a wrecking crew of late, registering 4.5 sacks over the past three games. On the season, he has 5.5 sacks, and is firmly positioned in any discussion for the team’s defensive MVP. After getting a sack in the opener, Jinkens had gone five games in a row without one. He began to pick it up once defensive coordinator Vance Bedford increased pressure in the Oklahoma game.

4. Will DeShon Elliott build on his two-interception game against Kansas?

Elliott won’t be promoted to starter, but his arrival on defense is expected to go further, as Bedford said he’d like the freshman to take 30 snaps. That sounds all well and good, but in a close game it’s difficult to believe Bedford won’t stick with mainstays Dylan Haines and Jason Hall. Elliott, who missed the first five games with an injury he sustained in camp, looks like a keeper after snagging two fourth-quarter interceptions against the Jayhawks, including one that he swooped in and saved from hitting the ground.