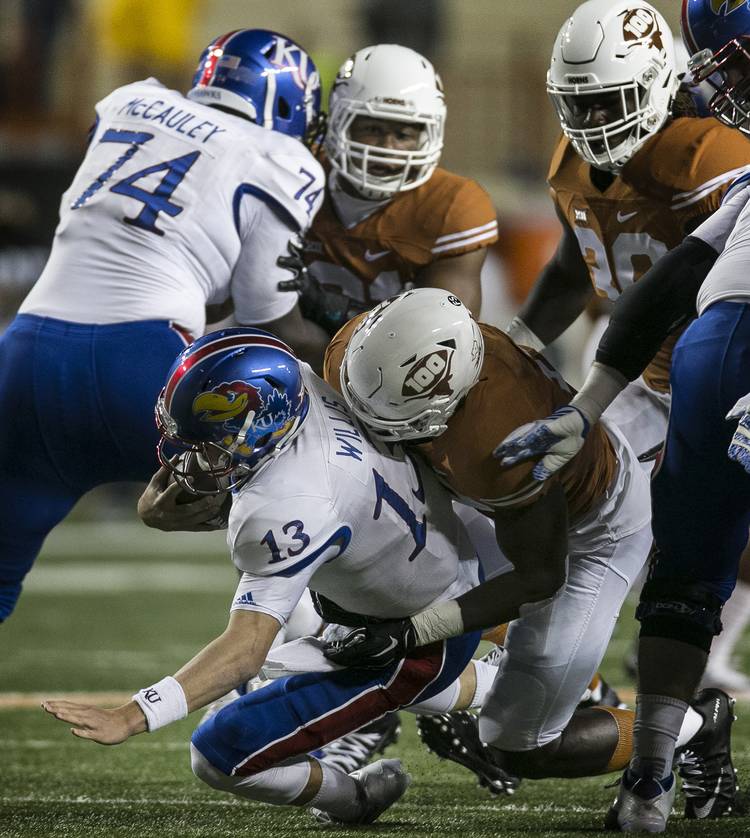 Players have heard all week about how bad they’ve been on the road, not that they needed reminders of the shutout at Iowa State and near shutouts at Notre Dame and TCU. In total, the Horns have been outscored 112-10 in road games, though a wonderful effort in a neutral-site win over Oklahoma suggests players don’t lapse into a trance every time they board a plane or bus. Veterans spoke this week about the difficulty of playing in Morgantown, yet numbers tell a different story. Since joining the Big 12 in 2012, WVU is just 6-10 at home against league opponents.

Something good seems to happen whenever Texas goes deep to Burt, its big-play freshman. Last week, he burned Kansas’ Marnez Ogletree for an 84-yard TD catch on Texas’ first play. Burt has carved a niche out of big plays, gains of 48, 69, 43, 36 and 20 yards. Still, he averages only about two catches per game. Texas won’t have to worry about All-Big 12 safety Karl Joseph, who will miss his fifth game after sustaining a season-ending knee injury. He had five interceptions, two more than anyone else has on the team.

Defensive coordinator Vance Bedford has found something in the past four games, dialing up constant pressure that’s resulted in 23 of Texas’ 30 sacks on the season. Linebacker Peter Jinkens has been the biggest beneficiary of the switch, registering 4.5 sacks in that span. Opponents of WVU have 23 sacks on the year, which is about three per game.

JERROD HEARD VS. THE FIRST QUARTER

This week, Heard and coach Charlie Strong both said that Texas’ performance will reflect the play of the freshman quarterback. So it’s imperative to get him going early, be it with a long ball to Burt or maybe a nifty scramble. Heard’s starts tend to rub off on teammate, be it positively or negatively. He said he’s anxious to distance himself from his road struggles. Now, he has to prove it.

West Virginia employs an unconventional 3-3-5 stack on defense, something Heard hasn’t seen in his eight starts. The back end of the defense is similar, but the front is what Heard will need to conquer. It’ll be a new challenge for freshman linemen Patrick Vahe and Connor Williams, too, as the Mountaineers show an odd man front. Last year, Tyrone Swoopes struggled in this game, as UT won 33-16 in spite of his 11 of 29 passing for 124 yards.