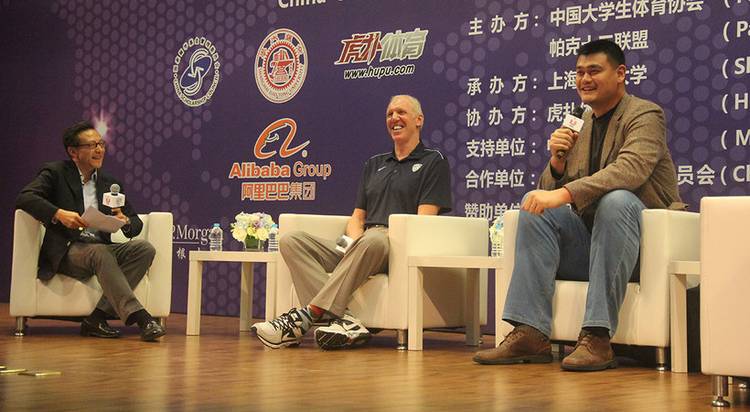 Former NBA star Yao Ming, right, has become a basketball ambassador in his homeland China. On Friday, Yao spoke of China's need to stress academics as well as athletic development to young players. He sat on a panel with fellow NBA legend Bill Walton, center. (Photo by Alex Espinosa/Pac-12 Network)

SHANGHAI — Texas basketball fans are solely focused on the Longhorns’ experience in China and whether Shaka Smart’s bunch can come home 1-0. For Chinese nationals like Yao Ming, the Texas-Washington game truly means much more.

Yao, now 35 and well beyond his NBA career with the Houston Rockets, spends his days studying at Jiao Tong University in Shanghai. Like most star athletes, Yao spent his younger days working on his jumper instead of his grades.

“That’s why I’m back to school after my career,” Yao said. “I did it in reverse.”

Whether it’s because of his superstar status, desire to give back or love for the game, Yao wants basketball to flourish in his homeland. That much was obvious during a panel discussion on Friday at Jiao Tong that included fellow NBA great Bill Walton.

Saturday’s matchup, scheduled to start at 9 p.m. Friday in Austin, represents huge progress for Yao. He’s the one who pushed Pac-12 commissioner Larry Scott to bring this event here. It’s the first regular-season intercollegiate game between U.S. teams in China and the coaching debut for UT’s Shaka Smart.

Yao was supportive when various U.S. athletes traveled thousands of miles to play exhibitions against Chinese professional teams. He helped the Pac-12 launch its Asian expansion in 2012.

“He’s the one who really said, ‘These exhibitions games are interesting, but these Chinese basketball fans have gotten pretty sophisticated,’ ” Scott said. “There are exhibitions and then there’s a real game.”

Ma Jian, a famous Chinese hoops star who played college basketball at Utah, expected both teams to come ready for battle. “That game is serious. You’re going to see both teams fighting hard, much harder than preseason,” he said.

A huge focus during the China-U.S. University Sports and Education Summit on Friday was how China can blend athletics and academics, something Yao wants to see.

“For a long time here, sports and education, were parallel,” Yao said. “I think this game and show is a perfect example that the two lines can touch each other. … We can balance that well and we can achieve both. It’s not like we have to make it an option, go left or right.”

Scott gave a crowded lecture hall a brief history of the Pac-12 Conference, a league celebrating its 100th year. Shen Zhen, vice president of the Federation of University Sports in China, said his association is only 40 years old. Organized Chinese athletics, at least when compared to the U.S., has a long way to go to catch up.

Shen said the FUSC is sending more than 200 coaches from various Chinese sports to France and the United Kingdom this year to learn better coaching techniques. Current Chinese coaches “are limited” by a lack of health and nutritional training, Shen said.

“We call them seeds,” said Liu Jinghui, secretary-general of the China Scholarship Council. “Those 200 seeds will be spread all over China.”

Next year, that number is getting bumped to 600. One hundred Chinese coaches are going to Salt Lake City to be embedded at the University of Utah, school president David Pershing said.

The University of Texas athletic department does not receive taxpayer funding. The department is wholly funded by private giving, something that’s foreign in a country where sports are funded by the Chinese government.

“If not for the educational component, I don’t believe corporations would support college athletes,” Plonsky said. “I think the educational piece of that is the most important driver in our endeavors.”

The Pac-12 is using men’s basketball to get its foot in the door of the world’s most populous country. It’s clear Scott has broader goals in mind. The league announced a new collaboration with Letv Sports to stream 200 live athletic events in four sports across China.

At Friday’s summit, Scott announced that Stanford and Harvard will meet in the 2016 Pac-12 China game. As for the real moneymaker, Scott said he can’t say when it will happen, but he definitely wants to bring American football to China.

No one can definitively say what the long-term benefits of this Pac-12 initiative will be. Give Scott some credit, though. His league isn’t afraid to try something no one else will. China, by all appearances, has its arms wide open, thanks to its favorite son.

“Basketball really doesn’t need any one person like me to promote (the sport) in this country. It was famous before,” Yao said. “People love basketball here. But basketball today is getting competition from other sports, like soccer and tennis and other sports, including some other cultural activities like movies and other entertainment.

“Basketball is very unique,” he added, “which really provides a lot of value and shapes people’s character.”

Our staff takes: This one has the makings to be another close one