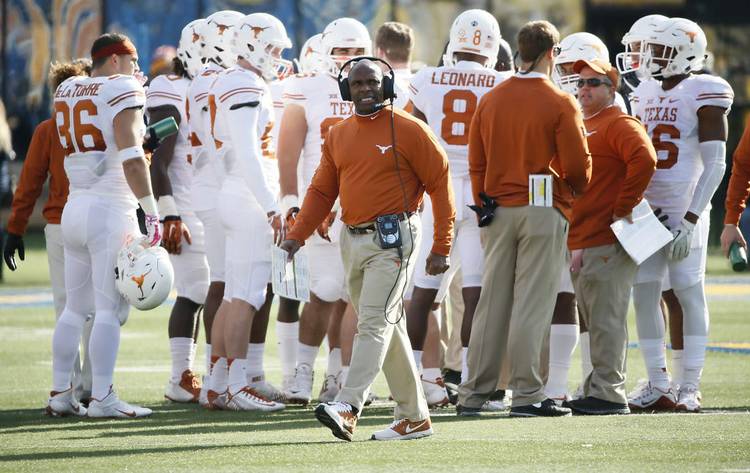 Tyrone Swoopes’ turnover after Texas had reached the WVU 20 wasn’t good because it triggered a lightning-fast, 87-yard scoring drive by the Mountaineers, but WVU linebacker Jared Barber’s 42-yard return on D’Onta Foreman’s bobble for the home team’s first score erased some Longhorn momentum.

Poised to make it a one-score game, Texas failed to do so when Jerrod Heard’s under thrown pass to Armanti Foreman was picked off at the goal-line by cornerback  Daryl Worley early in the fourth quarter.

As costly as the fumble was, Foreman atoned very quickly with a burst over left tackle, going 65 yards virtually untouched for the Longhorns’ first touchdown of the day. He’s averaged 39 yards on his five touchdown runs.

In losing for the sixth time this season and the fourth time in four true road games this year, several of the Longhorn players fell back on that time-honored alibi. Texas didn’t execute.

After going 0-10 when the opponent scored first on Charlie Strong’s teams, Texas at least struck first with a 31-yard field goal by Nick Rose on Texas’ second offensive series of the game. Didn’t matter.

After threatening to score but at least forcing West Virginia to start at its own 13 with 108 seconds left in the half, the Mountaineers needed just 48 seconds and four plays to put up a touchdown on Jovon Durante’s 53-yard reception over Texas freshman Davante Davis and a 21-10 halftime lead.

Texas came out smoking in the second half, working West Virginia for an 80-yard, 15-play drive capped by Heard’s 50-yard touchdown pass to Daje Johnson, his first scoring reception of the year.

Davis made a nifty interception on a poorly thrown ball on a slant route. But the Longhorns went 3-and-out when center Taylor Doyle snapped the ball prematurely on a third down, and Texas punted after Heard recovered the fumble. Play-caller Jay Norvell said Doyle was confused because WVU’s defense was simulating Texas’ snap cadence.

West Virginia had enjoyed days of 70 degrees for most of its other home games this season, but Saturday broke with dark, gray clouds and 41 degrees for its coldest game of the year.

Got to tip the cap to Mountaineer fans, who stayed huddled with their tailgate friends in the parking lot at Milan Puskar Stadium. The game wasn’t sold out, partly because Texas returned 1,200 of its ticket allotment. With 75 minutes before kickoff, there were about 100 fans in the stadium. Uh, cold bleacher seats.

As weeks go by, Texas’ win over OU an even bigger shock