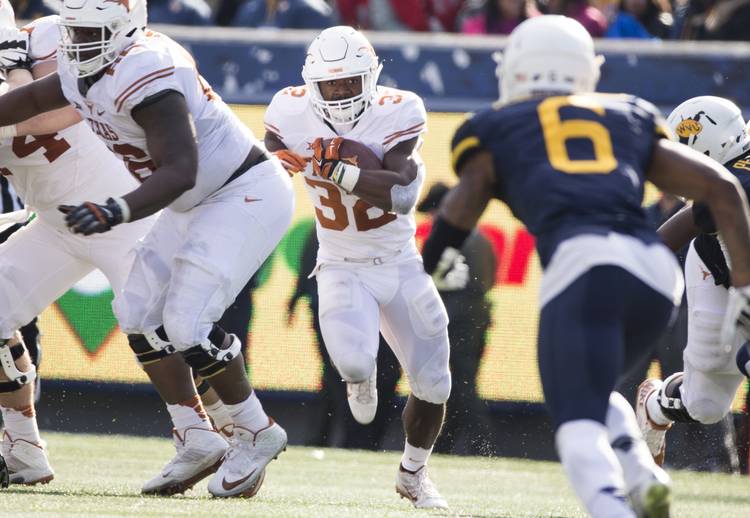 For the second time in his career, Gray, the Longhorns’ senior running back, did not finish a game at West Virginia because of an injury.

Two years ago in Morgantown, he was lost for the season when he ruptured his Achilles. On Saturday, he hurt his foot in the third quarter of a 38-20 defeat and was not seen from again.

Longhorns coach Charlie Strong did not provide an update, though it’s tempting to read into Strong not including Gray or right guard Patrick Vahe (knee) among a group of players injured in the game who “should be back.”

It’s unclear when Gray’s injury occurred or what happened. He was attended to by trainers after halftime, and appeared to walk off whatever was bothering him and re-entered the game. After one third quarter carry, he was out again and went to the locker room.

“Johnathan got banged up a little bit with his foot,” play-caller Jay Norvell said.

Gray finished with 56 yards on 14 carries and remains 12th all-time in career rushing at Texas — 54 yards behind Eric Metcalf, and 57 yards behind Hodges Mitchell.

Before the game, he was asked about returning to WVU.

“It means a lot,” Gray said. “That’s the game of football. So you’ve just got to move on and help your teammates out in any way possible. “I get another chance to go out there and do that, and that’s what I plan on doing.”

Some have suggested Gray’s Achilles injury, a significant setback for someone who depends so heavily on his legs, hindered Gray’s burst and kept him from reaching his full college potential. The nation’s No. 1-rated high school back in 2012, Gray (489 yards) is not likely to snap Texas’ seven-year drought without a 1,000-yard rusher.

That distinction could perhaps go to Foreman, who needs 319 yards the rest of the way to reach 1,000. He’ll probably have to do it in two games, as it seems far-fetched that UT would beat Texas Tech and Baylor on the road to clinch a postseason berth.

Foreman notched his fourth 100-yard game, wracking up 147 yards on 18 carries. He did fumble once, and WVU’s Jared Barber scooped it up and ran 42 yards for a score to go ahead 7-3. On the radio broadcast, Quan Cosby said that Foreman announced on the sideline that he’d make up for the gaffe. A man of his word, he ripped off a 65-yard run for a touchdown on the very next play, giving him a long score for the second week in a row (93 yards against Kansas).

Fans have made a big deal about the breakdown in touches between Gray and Foreman, a sophomore who was lightly recruited and was viewed as a bonus in the package that delivered his twin brother, receiver Armanti Foreman, to Texas. Saturday was just the third time that Foreman got more touches than Gray, though injuries to both runners flaw the tallies.

Foreman, who hurt his wrist, should be back. The same cannot be said with as much conviction for Gray, who at the very least won’t be coming back to Morgantown.

Texas vs. West Virginia: Horns up, Horns down, plays of the game