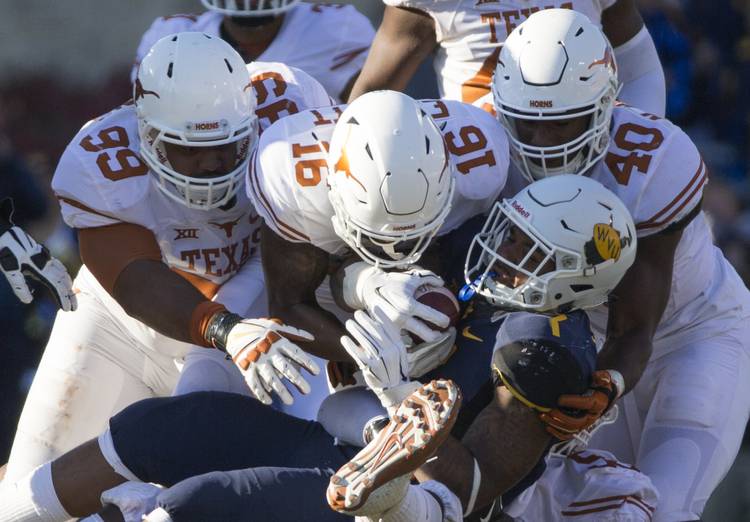 MORGANTOWN, W.V. — By the looks of it, Texas’ run defense had progressed in recent weeks.

Mountaineers quarterback Skyler Howard attempted only 12 passes on Saturday, giving way to a rushing attack that wracked up 51 carries in WVU’s 38-20 win over Texas. The Mountaineers gained 257 yards to average 5 yards per carry. The shifty Wendell Smallwood accounted for 165 yards, and Rushel Shell 53. Howard and Elijah Wellman scored a touchdown a piece.

Prior to Saturday, Texas had held three of its last four opponents to fewer than 200 yards rushing, and had appeared to turn a corner in that area of defense. In only conference games, Texas ranked second in the Big 12, surrendering 160.5 rushing yards per game.

“We have to do a better job of staying in our gaps,” Longhorns coach Charlie Strong said. “We were over-pursuing the ball. They have really good running backs and the ball was cut behind us.”

The middle of Texas’ defensive line, as it often is, was open for business. WVU came into the game averaging 220 yards per game.

“We knew what they were gonna do — come out and run the ball,” cornerback Duke Thomas said. “No surprise at all.”

Jefferson starts: Malik Jefferson made his first start in three games, but it was touch-and-go for a while. Jefferson, who has been battling a stomach virus, vomited during warm-ups. Still, he led the team with 11 tackles.

Jefferson was not expected to play against Kansas last week, but those plans were scrapped and Jefferson entered the game once the Jayhawks began making plays in the second quarter.

Short yards: Texas Tech comes to town on Thanksgiving to close its regular season. The Red Raiders are bowl eligible after beating Kansas State on Saturday. … UT has been outscored 150-30 on the road, but is no longer scoreless in the first quarter of those games. … LB Ed Freeman played for the first time since injuring his shoulder against Cal on Sept. 19. He entered late in the fourth quarter. … LB Peter Jinkens recorded a sack, upping his team-leading total to 6.5.  … Freshman RB Chris Warren had a 22-yard run. … Nick Rose made field goals of 31 and 34 yards and is now 9 of 12 on the season. … Freshman CB Davante Davis recorded his first career interception. … D’Onta Foreman is averaging 39.2 yards on his five touchdown runs. He has scored from 2, 9, 93, 65 and 27 yards.