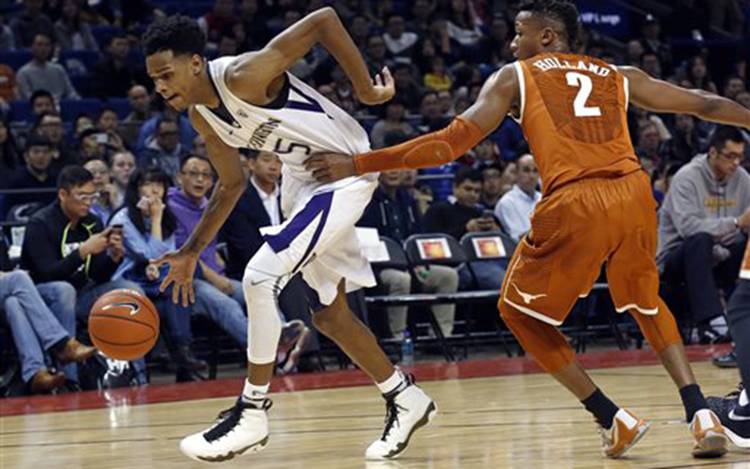 Dejounte Murray of the Washington Huskies dribbles past Demarcus Holland of the Texas Longhorns during a college basketball game at the Mercedes Benz Arena in Shanghai, China, Saturday, Nov. 14, 2015. The University of Texas and University of Washington played the first-ever regular-season college men's basketball game in China at Shanghai's Mercedes Benz Arena, organized by the Pac-12 conference in partnership with Chinese tech giant Alibaba Group. (AP Photo/Ng Han Guan)

SHANGHAI — If the Longhorns are being honest with themselves, they didn’t want to spend a week in China fulfilling someone else’s global ambitions.

Still, new coach Shaka Smart constantly reminded his team over and over again, “We have to make this a positive.” His competition sure did.

Washington embraced every minute of the first Pac-12 China game, hustling and muscling its way around Mercedes-Benz Arena on a smog-filled Saturday. Isaiah Taylor kept the Horns breathing by scoring 20 of his game-high 29 points in the second half. But the Huskies held on for a well-deserved 77-71 win.

No need to blame a Pac-12 officiating crew, which called a staggering 62 fouls. The Longhorns simply got blasted on the boards, something that’s supposed to be their forte, and shot a dismal 26.8 percent from the floor.

How could the Longhorns be uptight? The Huskies were the newbies here, the youngest team in the Pac-12 with 10 newcomers and nine players age 20 or younger. They were picked 11th in a 12-team league in the preseason poll.

Yet, that was the group that went for the early momentum, trying to dunk on the first two possessions. Neither one was successful, but it set the tone. Washington had 15 offensive rebounds in the first half and finished with an eye-popping 62 total.

“We didn’t just go out and play and relax,” senior Connor Lammert said. “It’s going to be a tough plane ride back but we’re going to learn from it.”

The first intercollegiate game played between U.S. teams in China brought in a curious crowd. Pac-12 officials announced the attendance at 7,188. The crowd was wowed by dunks, 3-pointers and blocks. They didn’t come to see a free-throw shooting contest.

It’s doubtful the Chinese government officials sitting court side were blown away by American officiating. The new hand-checking emphasis led to 20 fouls midway through the first half. It was awful basketball. Neither team could get any consistent flow, and fans saw 42 free-throw attempts in the first 20 minutes.

Led by guard Andrew Andrews, Washington built up a nine-point lead with 13:38 remaining. At that point, this was looking like a colossal embarrassment for the Horns. That’s when Taylor got going, driving and penetrating and drawing foul after foul.

His two free throws with 5:12 left cut it to one, and Texas actually took the lead on Javan Felix’s two free throws shortly thereafter. Texas had three excellent looks down the stretch. But Demarcus Holland air-balled a 3-pointer, and Felix missed back-to-back shots from beyond the arc.

Cam Ridley couldn’t hold onto the ball after Andrews missed one of his nine 3-pointers. Dejounte Murray knocked the ball loose, and the two big men got tied up. Murray got the foul call, hit two free throws and the Huskies had a four-point lead.

When the clock ran out, the huge contingent of Washington fans went wild. Texas players sprinted off the floor and hustled to the airport to catch a flight back to Dallas.

“I think when we watch the tape, we’ll see things and say, ‘That’s not really us,’” Smart said. “But again, we’re still developing who ‘us’ is.”

There were some positives. Ridley had 10 rebounds and six blocks. Kendal Yancy got to the free throw line a lot, but he was 5 for 12 there. Freshmen Kerwin Roach, Eric Davis and Tevin Mack all played like freshmen, frankly. But now they have a real game under their belts.

The more surprising takeaway was that the Huskies, not the Longhorns, were the ones with pep in their step. “Right out the gate, I felt that our pressure was a lot more,” said Andrews, who finished with 23 points.

Yes, it was only one game. Yet there was so much buildup to Smart’s debut, this type of outcome left everyone flat.

“We were a little more caught up in winning so bad that we threw all of our principles out the window,” UT forward Shaq Cleare said. “This game disappoints me. This is not how we play. This is not Texas right now.”