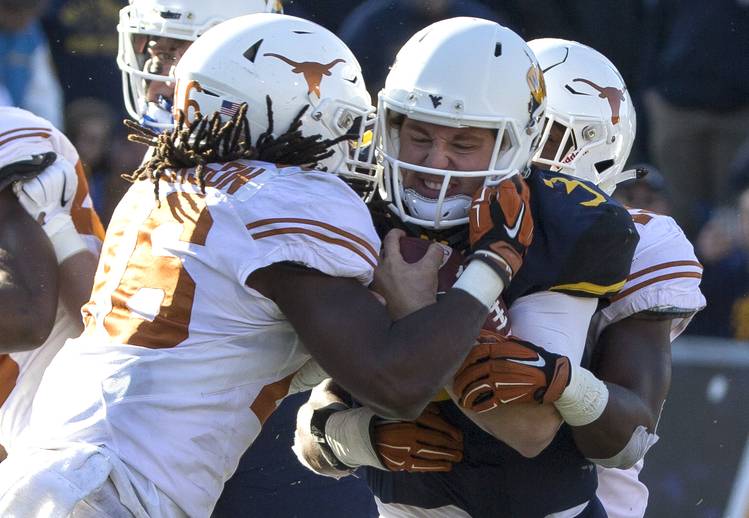 Texas Longhorns(46) Malik Jefferson and (19) Peter Jinkens sack West Virginia (3) Skyler Howard in the second half of the game on Saturday, Nov. 14, 2015 (RICARDO B. BRAZZIELL / AMERICAN-STATESMAN)

MORGANTOWN, W.V. — To bring context to this disappointing season for Texas, consider what the College Football Playoff committee must be thinking.

No, the Longhorns aren’t heading to a postseason semifinal, clearly, or perhaps any other bowl game, after taking their sixth loss, 38-20, at West Virginia on Saturday. The fear is Texas’ midseason upset win over Oklahoma, a result that gets more confusing by the week, could leave the Sooners and the Big 12 shuttered from the playoff for the second year in a row.

Hours after the Horns turned over the ball five times in Morgantown, No. 12 Oklahoma kept its playoff hopes alive with a convincing road win at No. 6 Baylor, offering up a performance on par with their entire season save for the Red River Showdown with Texas. Had Texas continued to play well after that Oct. 10 date, the Sooners may have had a better excuse for losing that game, which could’ve looked worse than 24-17 had Texas not ended the game with a knee at the goal line. However, UT has left Austin to play a game twice since then and was beaten ugly in both of them, beginning with a 24-0 loss at Iowa State. After OU, the Horns’ best win is, perhaps, Kansas State, which has yet to win a conference game.

At 4-6 overall, the Horns and second-year coach Charlie Strong are headed toward an abrupt ending to their season, a course that will be changed only with wins over Texas Tech on Thanksgiving (possible) and Baylor on the road (improbable).

Strong, sounding despondent after he slipped to 10-13 as Texas’ coach, offered up a glimmer of hope that his team might rally for a bowl berth.

“We have two games left,” he said. “We still have a chance.”

After Saturday, the Big 12’s only remaining unbeaten is No. 8 Oklahoma State, which closes the season against Baylor and Oklahoma. Both meetings are in Stillwater.

Baylor, OU, and TCU all have one loss a piece.

Texas’ latest loss was unlike the others. The Horns weren’t steamrolled, as they were in Forth Worth or at Notre Dame to open the season. They didn’t lose on a blunder, as they did on late-game special teams miscues against Cal and Oklahoma State. The issue this time was turnovers, five of them, including two fourth-quarter interceptions by Jerrod Heard. Coming into the day, UT had committed only seven turnovers in nine games, so this charity of giveaways came out of the blue.

“That’s so frustrating when you turn the ball over so many times,” Strong said. “When you’re on the road, you have to protect the football.”

The mood improved later in the day when Lewisville three-star guard Denzel Okafor tweeted that he had committed to Texas. Okafor, the 11th player to commit to the Longhorns’ 2016 class, was down to UT and TCU.

Strong will soon be confronted with some tough choices, chief among them what to do about an offense that has scored under 30 points in all but one Big 12 game. Assistant coaches Shawn Watson, Joe Wickline and Tommie Robinson are in the final season of two-year contracts, and none of their units have been particularly stout. The belief is Strong will use a new play-caller for the third year in a row, as Jay Norvell, who was brought to UT to coach receivers, has not instilled belief he can unlock magic with this group of offensive players.

After the OU win, confidence was high in Norvell, the former Sooners assistant. It was the high point for everyone.