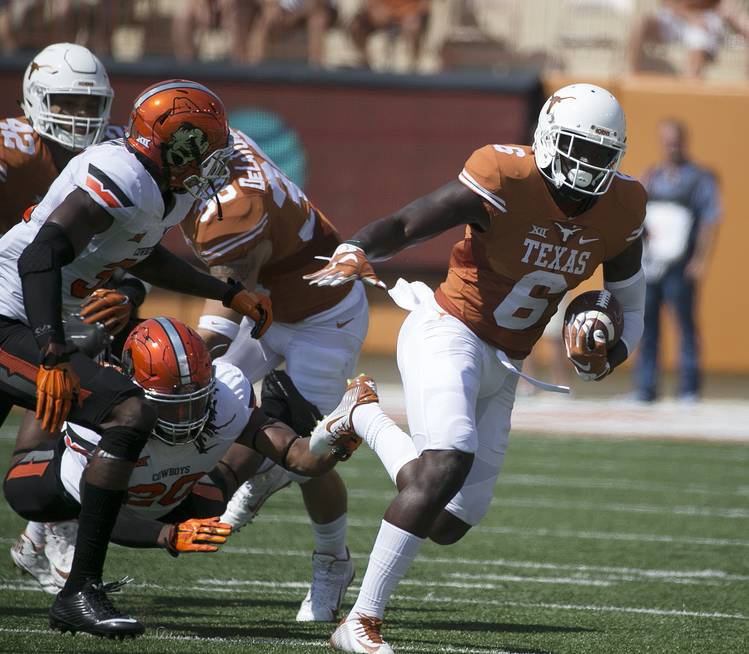 Texas's DeAndre McNeal breaks out of the Oklahoma State defense during the first half at Royal Memorial Stadium on Saturday, September 26, 2015. DEBORAH CANNON / AMERICAN-STATESMAN

Perhaps the recruiting pitch was one big misunderstanding.

Maybe last December, DeAndre McNeal was not promised the first touch of the season, but rather one touch all season. In that scenario, one of the great mysteries of Texas’ 2015 season would be cleared up:

Through 10 games, McNeal has one rushing attempt, no catches, and a handful of social media posts expressing discontent over his role. The snazzy one-handed catch he pulled down at practice a couple of weeks ago isn’t reflected in any box score or season stats, though it apparently has fueled McNeal’s belief that his freshman season is being wasted on the sideline.

McNeal tweeted a video of that catch in practice, then retweeted several responses suggesting he should be playing more. On Tuesday, McNeal made it clear he’s unhappy about his playing time, posting, “I can make these touchdown catches. I just need the chance.” He has since removed the post.

Given a mulligan, the coaching staff may have redshirted McNeal to get a better feel for his talents. Labeled an athlete by recruiting services, McNeal, the sidekick to high school teammate Malik Jefferson at Mesquite Poteet, had 41 catches for 869 yards and 12 touchdowns, along with 368 rushing yards and 11 more rushing touchdowns, his senior year. He was pegged to play receiver in college. But he outgrew the position, said head coach Charlie Strong, and volunteered to switch to tight end in the preseason. Within weeks he returned to receiver and has been toiling away on the scout team ever since.

Three weeks ago, offensive play-caller and receivers coach Jay Norvell was asked about McNeal’s role and said, “It’s going to be big for him how he finishes up” the season. Later that week, the 6-1, 236-pound freshman stayed in Austin for the 24-0 loss at Iowa State because of a foot injury. He has not appeared in two games since — a win over Kansas and a loss at West Virginia. Texas (4-6, 3-4 in the Big 12) is off this weekend and will host Texas Tech on Thanksgiving.

It’s not as if McNeal’s stuck behind a slew of All-Big 12 pass-catchers. Only two of Texas’ receivers, John Burt (20 catches, 413 yards, two touchdowns) and Daje Johnson (33-361-1), have had anything resembling a productive season amid a passing attack that averages a paltry 153 yards through the air, which ranks No. 118 nationally.

Before choosing Texas over Texas A&M and UCLA, McNeal told the American-Statesman that Longhorns coaches had promised him the first offensive touch in the opener at Notre Dame. It’s unclear if McNeal, a jokester, was being truthful, and Strong has consistently laughed off the claim. That first touch instead went to Armanti Foreman, a 2-yard run. McNeal’s only statistical contribution came three weeks later on a 9-yard end-around against Oklahoma State.

McNeal has not been made available to reporters. Jefferson came to his friend’s defense early in the season and suggested McNeal “should speak up” to coaches about his role. It’s not in McNeal’s DNA to bite his tongue. During the dust-up between the team’s freshmen and upperclassmen after the TCU loss, McNeal tweeted that his class “is here to pull Texas out of the drought.”

Mesquite Poteet coach Kody Groves said he does not question Texas’ handling of McNeal, but that he believes McNeal “will eventually make a name for himself” with the Longhorns.

“We know DeAndre’s a kid that can go out there and compete for playing time, and that’s what he needs to focus on,” Groves said. “We know he’ll be a success. It may not be this year, but at some point he will be a star for the University of Texas.”