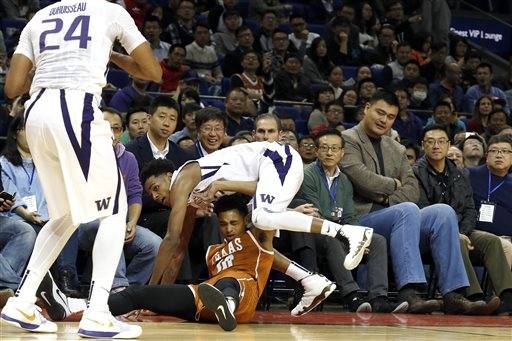 You don’t need a Ph.D. in coaching to break down how Shaka Smart’s three freshmen performed in last week’s season-opening loss against Washington.

“They were bad,” Smart said Thursday.

Eric Davis was 2 for 12 shooting, Tevin Mack was 1 for 12 and Kerwin Roach went 1 for 8. Those three combined to shoot 12.5 percent from the floor, a staggering reversal from the dynamic scoring capability they all flashed during the preseason.

With China behind them, all three Longhorns are ready to make a better showing in Saturday’s home opener against Texas A&M-Corpus Christi.

Roach just shook his head and said, “I think I … could’ve done better. That’s all I’m going to say. I was out there just trying to search instead of letting the game come to me. Once I get that experience and more games under my belt, it’ll just come to me better.”

Anyone who saw preseason practices, the Orange-White scrimmage at Gregory Gym and the exhibition game against Tarleton State knows that opening performance was an anomaly. Smart chalked it up to first-game nerves. “Probably more than anyone else on our team,” he said.

At the moment, it’s the only game on their résumé. That changes dramatically in the coming week as the Horns face the Islanders and then take off for three games in the Bahamas at the Battle 4 Atlantis tournament.

All three freshmen are going to be heavy contributors this season, even though they may not have clearly defined roles yet. None of them want to be pigeonholed into anything, either.

Roach and Davis both said they want to be labeled as combo guards, players who can handle the point guard duties or play shooting guard. Smart himself doesn’t believe in labels, per se. If you can play, he’ll get you on the floor.

Mack has an intriguing frame. He’s a 6-foot, 6-inch athlete with length that, on first blush, would make him a perfect utility player. He shot 38 percent from 3-point range as a high school senior and averaged nearly 30 points per game. Play him at shooting guard, small forward or power forward if teams go with a smaller lineup; it’s all theoretically possible.

Smart put all three freshmen on the floor against the Huskies. Expect that to continue, unless one, two or all three show they don’t deserve it. Against Tarleton State, they subbed into the game before senior Javan Felix. “They deserved it,” Smart said afterward.

The freshmen aren’t the only ones who need a better showing on Saturday.

Big men Cam Ridley and Prince Ibeh need to show more aggressiveness on the boards. Connor Lammert, who battled what he called “a reactivation of (mononucleosis)” before the China trip, was frustrated with only three points and three boards in the opener.

Texas shot 26 percent overall and went 2 for 15 from 3-point range. Everybody needs to play better this weekend, not just the freshmen.

“First home game of the season, so there’s going to be a great crowd,” Mack said. “We’re not going to be worried about finding energy, because we’re going to have energy from the crowd.”

Like last year, Texas is hoping to rally late in recruiting