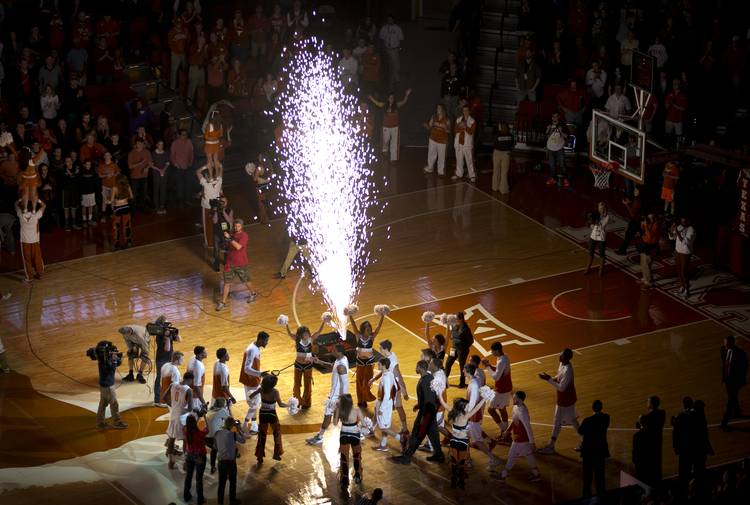 The Longhorn basketball team is introduced before the game against Kansas State on Saturday March 7, 2015. JAY JANNER / AMERICAN-STATESMAN

The Texas men’s team has recovered from its 15-hour journey home from China. The Longhorns spent the week in their own practice facility, ate things they recognized and pretty much enjoyed some level of normalcy.

In a perfect sports universe, Saturday’s home opener against Texas A&M-Corpus Christi would be a mulligan of sorts, a do-over, a cosmetic Control-Alt-Delete that resets the season back to its 0-0 origin. Unfortunately for the 0-1 Longhorns, that’s not how it works.

Texas will have that 77-71 loss to Washington in China sitting atop its schedule all season long, like a wart that can’t be cut off or heal over time. In some respects, senior Cam Ridley is OK with that.

Asked if coach Shaka Smart’s home debut feels like a fresh start, Ridley said, “You can say that, but it’s still something that’s going to stay fresh in our mind. We don’t want to experience that again. I think it was a learning lesson for us.”

A decent-sized crowd may flow into the Erwin Center to see the Horns face the Islanders (1-1).

The athletic department has about 2,000 tickets remaining for the matchup against No. 1 North Carolina on Dec. 12, Hank said.

Basketball fans in this town have always been a picky lot, as Smart will learn over the coming months. When the building’s full, it’s one of the best environments in the nation. And UT fans will come watch winners. But the Horns were 13-5 at home last season and averaged 11,249 fans along the way, a solid but not particularly outstanding total.

Smart’s arrival generated legitimate buzz throughout the Texas fandom. The Washington game was just that — one game. That’s why the Longhorns must put away their pictures, passports and visas and simply move forward.

“The game, obviously, did not go anywhere near the way we wanted to go,” Smart said of the entire Pac-12 China game experience. “So if you just evaluated that 40 minutes, I’d give it about a 2 out of 10.”

For the players, watching film with Smart’s coaching staff had to be excruciating.

“They had one possession where they had four or five offensive rebounds,” Ridley said. “I don’t think that’s something that’s happened since I’ve been here.”

Now the Longhorns can “hunker down, get in a routine and grow,” Smart said. The game against A&M-Corpus Christi is the first round of the Battle 4 Atlantis tournament. Next week, the Horns will again pack up and head to the Bahamas, where they’ll face Texas A&M and two other opponents.

Expect Ridley and fellow center Prince Ibeh to get more offensive opportunities against the Islanders, Smart said. The Horns need to activate both big men, and they need to show a little more bite, too. Yes, Texas was a strong rebounding team last season, but Jon Holmes and Myles Turner did a lot of the work. They’re gone.

Center Shaq Cleare reiterated his belief the Washington game was abnormal, that it was all the result of first-game jitters. “Yeah, we came out a little tight. We were just trying to be too perfect sometimes,” Cleare said.

Saturday is Texas’ chance to prove it was exactly that. No need to be tight when playing at home.

“We have to come in on Saturday and look to be aggressive,” Taylor said.