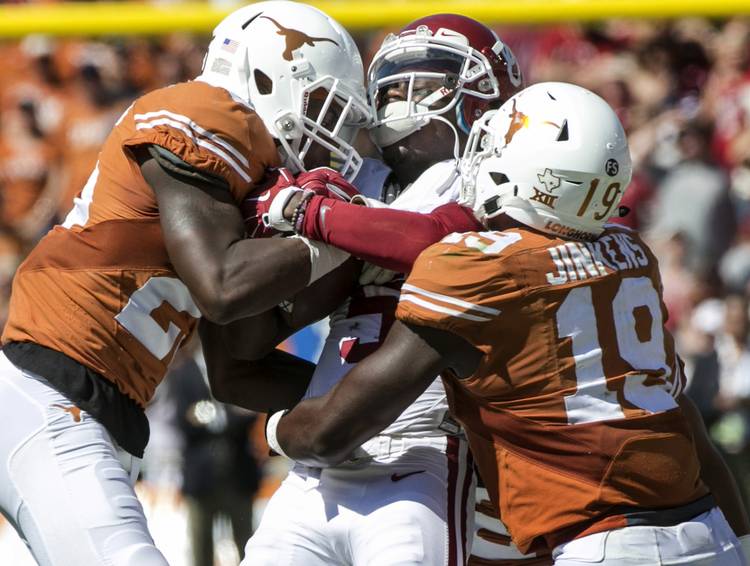 In one of those impassioned rants that he likes to give, Texas defensive coordinator Vance Bedford sounded off last week about the explosive offenses he’s having to face in the Big 12.

Bedford’s recital of the national rankings were off a bit. West Virginia is not the nation’s No. 5 offense, and winless Kansas certainly isn’t No. 9. Bad calculations aside, his message is to maybe be gentle when looking at the numbers put up by Big 12 defenses. In this league, it can be hard to make stops.

So maybe take that into consideration for these final two games when Texas plays the nation’s No. 3 (Texas Tech) and No. 1 (Baylor) offenses. Tech’s Jakeem Grant and Patrick Mahomes, and whichever quarterback happens to be healthy for Baylor on Dec. 5, could do some serious damage to Texas’ defensive totals, which have been consistent with what one might expect from a season-long youth movement.

For now, the Horns rank sixth in the Big 12 and No. 94 nationally in total defense, proving that there’s a cost in starting three true freshmen and playing several of their classmates. Asked if he looks to the future and how good his young talent might become, Bedford said no and that he’s living in the “precious present.” Which looks frightening, starting with a Tech offense that on Turkey Day will roll out a 4,000-yard passer (Mahomes has 3,911); a 1,200-yard rusher (DeAndre Washington); and a 1,000-yard receiver (Grant).

The elixir for an offense that has produced 30 points in only three of 10 games could be a Tech defense that ranks No. 127 nationally, ahead of only Kansas. But there are questions about whether Texas can move the ball without running back D’Onta Foreman, whose availability is in doubt after he underwent surgery last week on his pinkie. And Johnathan Gray, the starter who will be playing in his final home game, has a bad foot.

The belief is soon after the season is over, head coach Charlie Strong will make sweeping change to the offense and perhaps bring in someone to install a carbon of one of those Big 12 attacks that have given him and Bedford so many fits. TCU’s Sonny Cumbie of the Mike Leach coaching tree and Tulsa’s Sterlin Gilbert, who runs a version of Art Briles’ spread at Baylor, are names that have been bandied about.

By all appearances, it would be a surprise if Strong threw Bedford overboard and rebooted the defense. High-profile freshmen are producing, and two of them, cornerbacks Holton Hill and Davante Davis, have taken over starting spots. Malik Jefferson continues to man inside linebacker, and guys like end Charles Omenihu, linebacker Anthony Wheeler and safeties P.J. Locke and DeShon Elliott have gotten time as backups. In conference games only, the Horns are second in total defense to Oklahoma, surrendering 393 yards per game. So the future looks bright.

“As the season’s gone on, they got a little better, a little smarter,” Bedford said. “They got burned a few times, and because they have gotten burned they’re getting better and they’re starting to heal a lot faster.”

Bedford is almost expecting some wounds to open in these final two games. But before pouring salt, consider the competition.