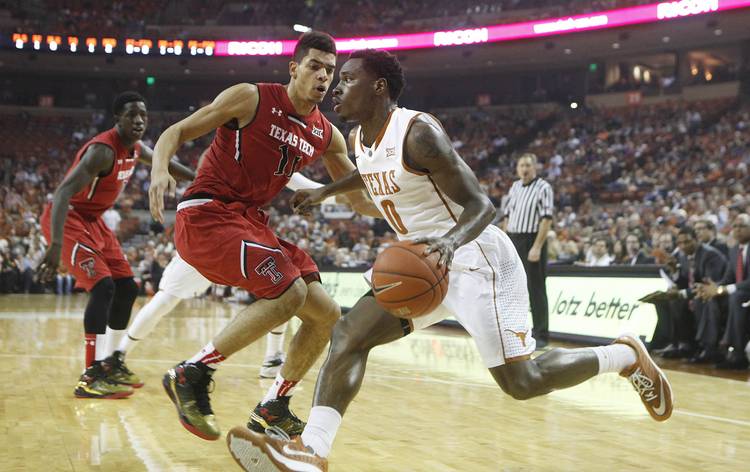 Texas guard Kendal Yancy suffered a concussion against Texas A&M-Corpus Christi, and his status for Wednesday's game will be determined hours before tipoff against Texas A&M. (Stephen Spillman for AMERICAN-STATESMAN)

About Texas: Judging from the first two games, coach Shaka Smart said, “We’ve actually played pretty good first-shot defense, the problem has been giving up offensive rebounds.” A&M-Corpus Christi grabbed 22 offensive rebounds, compared to Texas’ 15. That leads to extra opportunities; the Islanders had 72 shots while the Horns had 57. … G Kendal Yancy’s status will be determined midday Wednesday. He suffered a concussion against A&M-CC. … Smart does not seem worried about freshman Tevin Mack’s slow start. Mack, a proven scorer in high school, is 1 for 18 shooting in two games so far.

About Texas A&M: Just like the Longhorns, the Aggies expect big things from their freshman class. Tyler Davis, Admon Gilder, D.J. Hogg and Elijah Thomas are all expected to be key contributors. Davis already posted his first double-double, with 18 points and 12 rebounds against Southeastern Louisiana. … Alex Caruso and Anthony Collins are terrific at ball distribution, combining for nearly 10 assists per game. … Danuel House was named to the preseason Wooden Award watch list as one of the top 50 players in college basketball. … A&M has scored 100 points in back-to-back games for the first time since the 1989-90 season.

Sure, Texas vs. Texas A&M in hoops is fine; but why not football again?