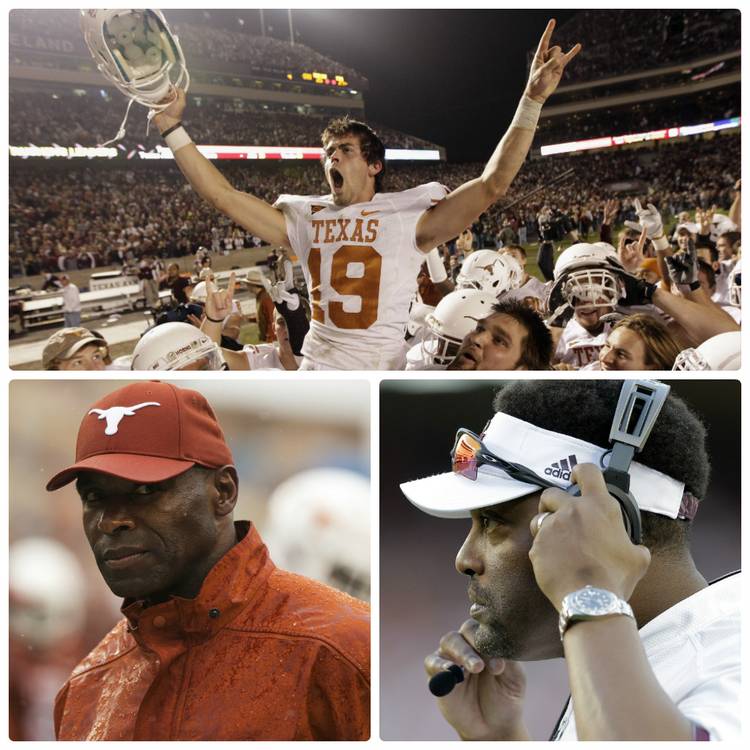 This is Diplomacy 101. It took basketball tournament organizers in the Bahamas to pull off what level-headed administrators here in Texas can’t seem to do — get the Longhorns and Aggies back together again.

Tournament organizers didn’t bother asking the schools about the politics. Texas and Texas A&M both agreed to play in the Battle 4 Atlantis this week in the Bahamas, and, lo and behold, we have Wednesday’s matchup. Granted, it’s in a hotel ballroom, just steps away from the ocean in a place called Paradise Islands.

Of course, to many Texans, a men’s basketball game isn’t on par with renewing the schools’ century-old football rivalry. But, hey, it’s a start.

“I grew up watching Texas,” UT forward Connor Lammert said. “I think we know what has come before us, and the mentality they’ve had going against this other team.”

A&M men’s coach Billy Kennedy conceded to reporters in College Station that, yes, this was an important game, albeit 1,300 miles from home.

“I’d be lying if I told you it wasn’t a big game,” Kennedy said. “Our hope is to be able to play in the state of Texas in the future. … I’d like to do it one game here and the next year there, kind of like we’re doing with Baylor.”

Wait? Is the ice thinning on the bitter cold war between these two schools?

A&M left the Big 12 after the 2011-12 athletic year for the SEC. Many Aggies believe the school should never look back, although the school’s fight song has not been altered to erase UT from the lyrics. The Aggies still want to “saw Varsity’s horns off” while staring across the field at the Gators, Gamecocks and Crimson Tide. Texas fans still shout out Texas Fight, “And it’s goodbye to A&M.”

Could Texas and Texas A&M ever play football on Thanksgiving again?

UT has to rotate Thanksgiving opponents, because the Horns can’t find a willing partner to schedule a permanent, holiday home-and-home series. Last year, TCU came to Austin. This year, Texas Tech plays UT in a nationally-televised game on Fox Sports 1.

A&M and LSU have linked up for a new series, although this year’s game in Baton Rouge is on Saturday. TV partners push LSU to host the game on Thanksgiving, but athletic director Joe Alleva said in May, “As long as I’m here, we will not play in Tiger Stadium on a Thursday, I guarantee you that.”

Texas and Texas A&M coaches seem open to the idea, although they also know monumental obstacles must be overcome first.

“I would love to play Texas A&M,” UT football coach Charlie Strong said on Monday. “You look at two in-state rivals, it’s a big-time game for us. I would love for it to happen. But a lot of things have to worked out for it to be.”

That echoes what A&M’s Kevin Sumlin said in July during an Austin alumni event. “I think everybody wants that game,” Sumlin said. “Time brings about change. We’re in different leagues. It’s going to happen. I just don’t see it happening anytime soon.”

And therein lies the rub. Essentially, it comes down to campus politics and hard feelings.

Former Texas athletic director DeLoss Dodds was so angry about A&M leaving the Big 12, he made it clear years ago, “We get to decide when we play them.” The man who replaced Dodds, Steve Patterson, said there may come a day when it would “make some business sense, some branding sense” to play again. Some interpreted that as nonsense.

Current UT Chancellor Bill McRaven made it clear where he stands. “I’m a big believer that we need to get back and play the game,” McRaven told Texas Monthly. “I’m not sure everybody’s in agreement with me, but that’s a tradition worth reviving.”

Everybody knows where A&M regent Tony Buzbee stands. “I’m going to advocate that the Aggies play Texas again in the near future,” he posted on Facebook in September. “The Aggies need some cupcake games to rest and heal.”

Sharp and other A&M officials have maintained a similar public stance: The Aggies would be happy, even excited, to play the Longhorns in the College Football Playoff. But let’s be honest. Neither team is getting to the national semifinals this year or anytime soon. UT is rebuilding its program under Strong. A&M is fighting an uphill battle in the SEC West, battling Alabama, Auburn and LSU.

Still, interim Texas athletic director Mike Perrin is open to the idea of a non-conference game. “There’s pressure from many areas for that game to resume,” Perrin said.

Why should either team even consider it? Season ticket sales.

Playing Texas at home on even-numbered years would make business sense for A&M. In those years, the Aggies play at Alabama and Auburn. Next season, A&M’s conference home games are against Tennessee, Ole Miss and LSU. A&M has UCLA (2016), Clemson (2018) and Colorado (2020) coming in future years.

A&M bean counters will note the 2018 and 2020 SEC home schedules aren’t that impressive. Kentucky comes to A&M in 2018; Vanderbilt arrives in 2020. As things stand now, Sumlin is 6-9 against SEC teams at Kyle Field since the start of the 2012 season.

Texas officials would probably be OK with playing in Austin on odd-numbered years. The 2017 home schedule features Maryland and Central Florida, along with usual Big 12 foes like Kansas and Kansas State. The even-numbered years work in UT’s favor from a ticket-selling point of view, getting Baylor and TCU at home.

If the Longhorns ever hope to expand the south end zone of Royal-Memorial Stadium, they’ll need solid opponents to hawk more season tickets and suites.

This year’s seniors are the first group of Longhorns and Aggies who will never have played each other since the series began in 1894; the last series hiatus took place from 1912-14, but was resumed in 1915 and remained until the 2011 split.

“I feel like that would be a nice game,” said Texas senior linebacker Peter Jinkens, who grew up in Dallas. “I’ve never played A&M, but I’ve seen the film and the stories about it. I’d like to be a part of that, too.”

“I kind of like the way we went out on top, though, with that final win,” UT safety Dylan Haines said. “So I don’t know if we’re ready to play yet. I definitely see that coming around in the future. I don’t think that was the last Texas-Texas A&M game.”

With a chip on his shoulder, Williams looks to lead Longhorns