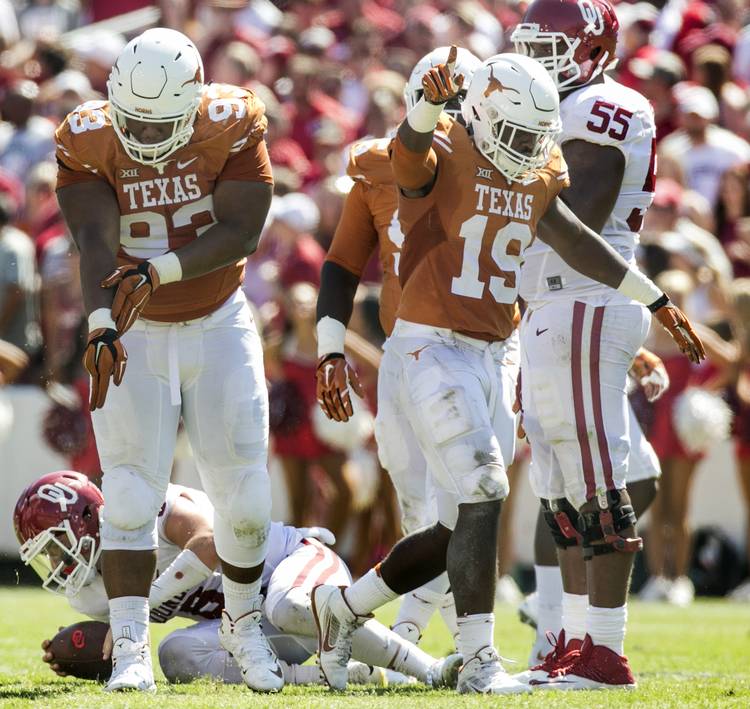 Texas linebacker Peter Jinkens (#19) hasn't given up on this season and doesn't want his teammates to do that, either. Jinkens has a team-leading 75 tackles and 6.5 sacks this season.

Texas linebacker Peter Jinkens hasn’t given up on the 2015 season.

“We can still have a chance to go to a bowl game,” the senior said, “so why would anyone want to throw in the towel now?”

Neither has safety Dylan Haines.

“I know everyone’s kind of written us off and we’re not making a bowl, the season’s over and it’s time to start coaching for jobs and playing young players,” Haines said. “But that shouldn’t be the mentality. If there’s a chance you can make a bowl, why not go for that?”

The Longhorns have their families and their health, but don’t expect them to be overly thankful for a 4-6 record.

NCAA officials are scrambling to determine whether 5-7 teams can become bowl eligible. Back-dooring into a bowl game with a losing record isn’t ideal. So it’s best if UT takes care of business Thursday night against Texas Tech (6-5 overall, 3-5 in Big 12) before focusing on No. 7 Baylor in next week’s regular-season finale.

Senior night usually brings out everyone’s best, as 22 Longhorns will play their final home game at Royal-Memorial Stadium. “After the game, I may get home and just get a half-gallon of Blue Bell and tear up,” senior center Taylor Doyle said.

The Red Raiders have every motivation to play well, too. Tech hasn’t won in Austin since 1997. This will be just the second time in school history the Raiders have played on Thanksgiving. Fox Sports 1 will broadcast the game nationally, but many in-state football fans probably won’t change the channel until the Panthers and Cowboys finish up.

By then, Tech may already be on the scoreboard. Quarterback Patrick Mahomes leads an offense that ranks second nationally in scoring (46.5) and third in total yards per game (588.1).

That puts incredible pressure on a Texas offense that averages about 25 points per game and has scored more than 40 points only once since mid-September. That 52-point outburst came against Kansas, arguably one of the worst teams among the top five major conferences.

Texas will be without running back D’Onta Foreman (finger). Senior Johnathan Gray (turf toe) will be slowed, if he can play at all. That means heaping helpings of freshmen Chris Warren and Kirk Johnson against a Tech run defense that’s been gashed all season.

“Usually on Thanksgiving their students are gone, so it’s not as crazy of an atmosphere as it normally would be being on Thanksgiving night there in Austin, so we’ll see,” Tech offensive coordinator Eric Morris said.

Texas coach Charlie Strong made it clear this week he’s not giving up on the program or the players. He’s probably hoping the fans haven’t, either.

“There are two games left, and they know how important these two games are,” Strong said of his players’ overall mindset. “There’s no reason for them not to understand that.”

Staff takes: Their backs against the wall, Horns are facing fourth and bowl to go