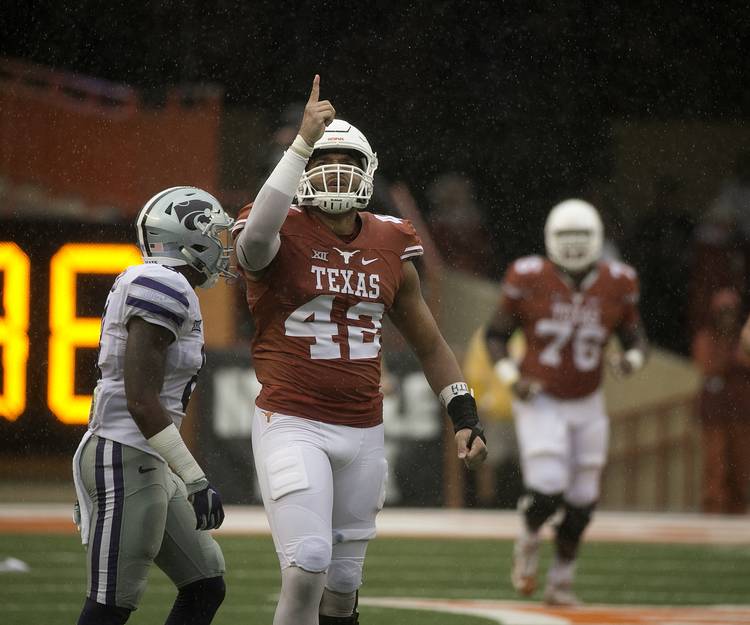 Texas's Caleb Bluiett reacts after a catch and gained yards against Kansas State during the second half of their game at Royal Memorial Stadium on Saturday, October 24, 2015. DEBORAH CANNON / AMERICAN-STATESMAN

BRIAN DAVIS: Can UT win in a shootout?

Never, ever underestimate Texas Tech’s desire to kick Texas when the Longhorns are down. That’s exactly what the Red Raiders want to do Thanksgiving night. The Horns better be ready for a battle. Yet despite the stats and matchups, UT has always held its own in this series. One major concern is whether Texas can score enough points to keep up. If the Raiders get rolling, they can easily put up 30, 35 or 40 points — by halftime. Texas, as presently constructed, cannot handle shootouts.

KIRK BOHLS: Honestly, this is a mystery

Quite frankly, this game is a mystery to me. I could make the argument that Texas Tech is anything but a bad team. Hey, the Red Raiders have already qualified for a bowl game, so that’s something. Plus they dominated Arkansas on the road and came within a fluke play of knocking off TCU when the Horned Frogs were at full strength. But their defense has been horrid. Texas hardly comes in at full strength and has no margin for error regarding a bowl invitation. The Horns will get by Tech by almost the slimmest of margins, 42-38.

Charlie Strong makes it sound as if running backs D’Onta Foreman (pinkie surgery) and Johnathan Gray (foot) will miss this game, so that puts the onus on freshmen Chris Warren and Kirk Johnson to do the heavy lifting against Tech. But actually, it doesn’t. It’s time for Jerrod Heard to have a Cal flashback in the final home game. Texas Tech is a notoriously bad tackling team, so Heard should be able to hit a couple of seams to make at least three huge runs. He hasn’t wowed us in a while with those great open-field moves. Warren and Johnson will do their part, but the table is set for Heard to rush for 150 or more yards in a 38-33 win.

For his sake, I hope Johnathan Gray suits up Thursday. The senior running back is battling a foot injury and might not be able to go in his final home game, which seems fitting for someone who has dodged one issue after another his whole career. If it wasn’t the Achilles injury he suffered as a sophomore, it was the inexperienced line he suffered behind as a junior. Gray never lived up to his five-star hype, but I’d take issue with anyone labeling him a bust. In discussion of the team’s hardest workers and best leaders, Gray is always mentioned. That counts for a lot.