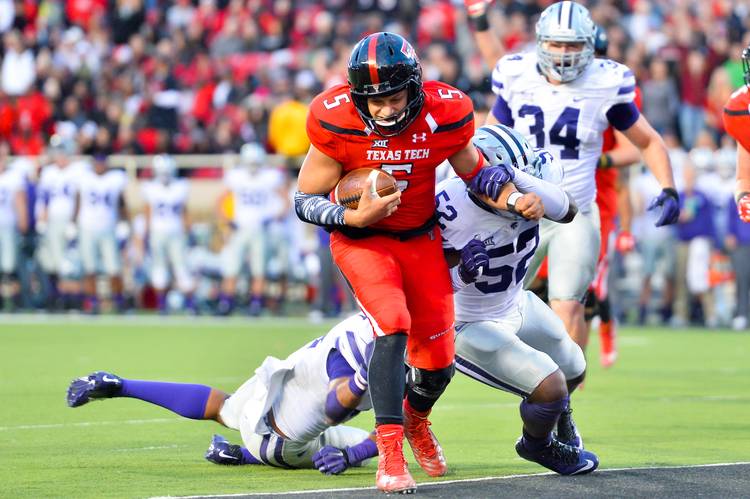 LUBBOCK, TX - NOVEMBER 14:Patrick Mahomes #5 of the Texas Tech Red Raiders breaks the tackle of Charmeachealle Moore #52 of the Kansas State Wildcats and scores during the game on November 14, 2015 at Jones AT&T Stadium in Lubbock, Texas. Texas Tech won the game 59-44. (Photo by John Weast/Getty Images)

On Thursday against Texas Tech, the eyes of Texas will be upon …

The last time Texas saw Mahomes, he could hardly stand after getting rocked by cornerback Quandre Diggs. Mahomes did not return to last year’s game, a 34-13 Texas win on Nov. 1, 2014. But he has made every start since and has developed into one of the better passers in the country. At some point Thursday, Mahomes will probably clear 4,000 yards on the season, as he needs just 89 more to do so. Should he do that, Tech for the first time in program history will field a 4,000-yard passer, a 1,000-yard rusher and a 1,000-yard receiver. A threat to run, Mahomes has nine scores and 414 yards on the ground. Should he get loose, he’ll be happy to know Diggs is now a Detroit Lion.

Washington tends to go unnoticed in Tech’s aerial attack, but he shouldn’t. His 1,282 rushing yards are third most in the Big 12, and his 6.6 average yards per carry ranks fourth. That should register as a concern for a Texas defense that has been gashed up the middle numerous times, including two weeks ago at West Virginia. That same day against Kansas State, Washington became the first Tech player to rush for 200 yards in a game since 1999. He finished with 248 yards and three touchdowns in a win that propelled the Red Raiders to bowl eligibility.

With 69 more yards, Grant will become Tech’s all-time leader in receiving yards. As it stands, he is tied with Lloyd Hill for third with 3,059. Next up is Wes Welker (3,069), followed by Michael Crabtree (3,127). At 5-feet, 7 inches, Grant poses a potential matchup problem for Texas’ bigger corners. He has scored a TD in four different ways this season — receiving, rushing, throwing, and kick return.

With a chip on his shoulder, Williams looks to lead Longhorns