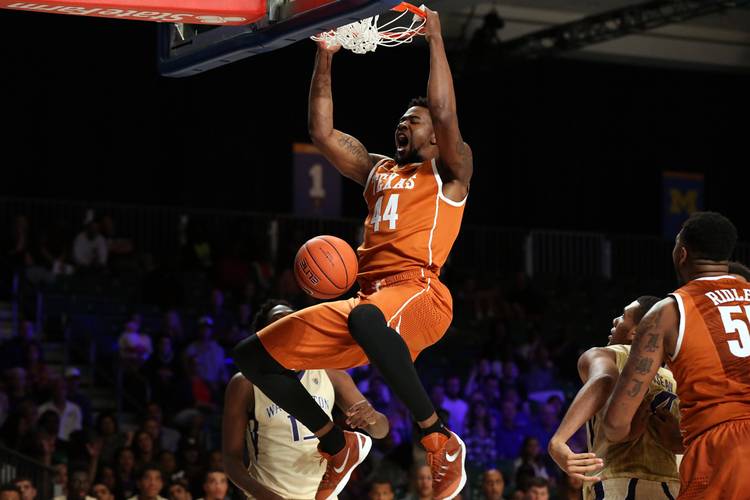 PARADISE ISLAND, Bahamas — Washington’s David Crisp was on the ground as the buzzer sounded and his air-balled 3-pointer to end the first half was attempted, unsuccessfully to be tipped in by teammate Joe Knight.

Texas entered the locker room with an eight-point lead and on pace for a stronger defensive showing than put together just a night before. It was a half buoyed by a 14-0 run in which Washington’s missed opportunities were one and done.

And it was a run pieced together by transition offense made possible by its defense.

“I thought in the first half, we really sat down and played some good defense,” head coach Shaka Smart said. “Our defense did a really good job team rebounding from there.”

Texas forced 18 turnovers — nine in each half — and played improved defense from just 24 hours before in an 82-70 win over Washington, a team it lost to just 13 days prior. Four players scored at least 13 points, with Eric Davis Jr.’s 15 leading UT for the second straight night. Texas will play either Michigan or Charlotte in the fifth-place game in the Battle 4 Atlantis.

After the 84-73 loss to rival Texas A&M on Wednesday, Smart didn’t mince words when he said the team needed to take more pride in its defensive effort. On Thursday, once the Longhorns got the 15-point lead in the first half, it never gave it up.

“We wanted to come out and have a better showing for ourselves,” said guard Javan Felix, who recorded three steals. “We try to pride ourselves on defense. And yesterday we didn’t do a really good job of that. Tonight we wanted to show ourselves that we were capable of getting stops afters stops.”

The Longhorns allowed just three second-chance points, compared to the 18 that they scored. Washington managed 15 offensive boards, but it didn’t translate.

With 11 minutes left in the game, Marquese Chriss got past a defender, but had his layup swatted away by Prince Ibeh who came across the baseline for the block. Crisp got the offensive board, but Dejounte Murray’s 3 was a fade-away with a hand in his face and it didn’t hit the rim.

“We lost that battle the last game,” said Cameron Ridley, who had 11 rebounds. “We wanted to come out and make sure that didn’t happen again.”

After Andrew Andrews made two straight 3s for Washington to cut the lead to 6, the Huskies used an entire 30-second shot clock to miss a couple of 3-point chances. They passed the ball around the perimeter but wasn’t able to find a shot that would have extended the comeback attempt.

Instead Andrews’ last-gasp attempt was rebounded by Ridley, and it sealed a win and an effort that didn’t seem present in the opening round.

Smart has consistently said that the same havoc defense that was his staple at VCU wouldn’t be brought over completely into his new job right away — the Longhorns hardly pressed in the first half.

A mastermind of his defensive approach, Smart said everything is still progress as he preaches defensive importance to a new group of players. He acknowledged that the win over Washington, though, was a step in that direction.

“I think this is a team that we can play in different ways,” Smart said. “We’ve just got to continue getting better and to learn how to do that.