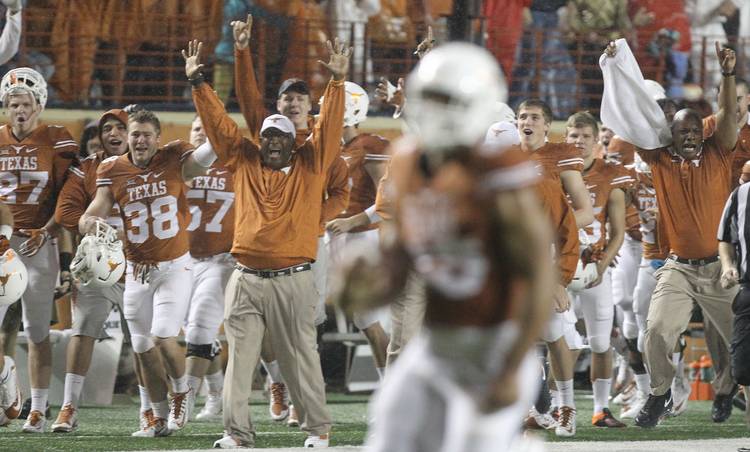 On a fourth-and-7 and desperately needing a first down with just under 3 minutes left, Texas play-caller Jay Norvell dialed up a deep pass on a wheel route to Daje Johnson, and it sailed incomplete. The ball went over on downs to Texas Tech, which scored on the next play to seal the Red Raiders win.

Yes, Chris Warren III had played before. But nothing like this. With three other running backs out with injuries, Warren got center stage and made the most of it with 276 yards rushing and four touchdowns.

Swoopes found tight end Caleb Bluiett on a short check-down pass, but he fumbled it over to Texas Tech. The review (which over-ruled the call on the field of an incompletion) took forever, and the Red Raiders capitalized on the short field with Pat Mahomes scoring from the 1.

Take your pick. Texas had a slew of them before and during the game. It was without top two running backs Johnathan Gray and D’Onta Foreman, and freshman Kirk Johnson left with a leg injury. Defensive tackle Tank Jackson sat out with a stomach ailment, and linebacker Peter Jinkens limped off with a knee injury.

With Texas backed up at its own 9, Warren broke five tackles en route to a 91-yard touchdown run.

Kirk Johnson had only carried the ball five times all season, but the true freshman uncorked a nice 32-yard run in the first quarter to set up Texas’ field goal for the first points of the game.

Without question, the worst play of Texas’ entire season was probably the deflected pass off cornerback Holton Hill’s hands into the grasp of Jakeem Grant, who completed a 65-yard touchdown play for a 7-3 Texas Tech lead. In fairness, Tech receiver Devin Lauderdale collided with Hill, popping the ball up in the air for Grant to grab it.

One series after he overthrew a wide-open Lorenzo Joe, Swoopes took some off and under-threw Marcus Johnson, and Tech cornerback Nigel Bethel picked it off.

Texas junior Dylan Haines picked off a Pat Mahomes pass on a fourth-down play at the Texas 29 for his fifth interception. He extended his return yardage to 200 yards for his career, second in school history behind only Chris Carter.

Although he was suited out and gingerly trotted onto the field during Senior Night celebration, Gray did a nice little shimmy before hugging his parents. He was out for the game with a turf toe.

Senior defensive tackle Desmond “Tank” Jackson was sidelined for the game with an upset stomach.

Texas vs. Texas Tech: Horns up, Horns down, plays of the game