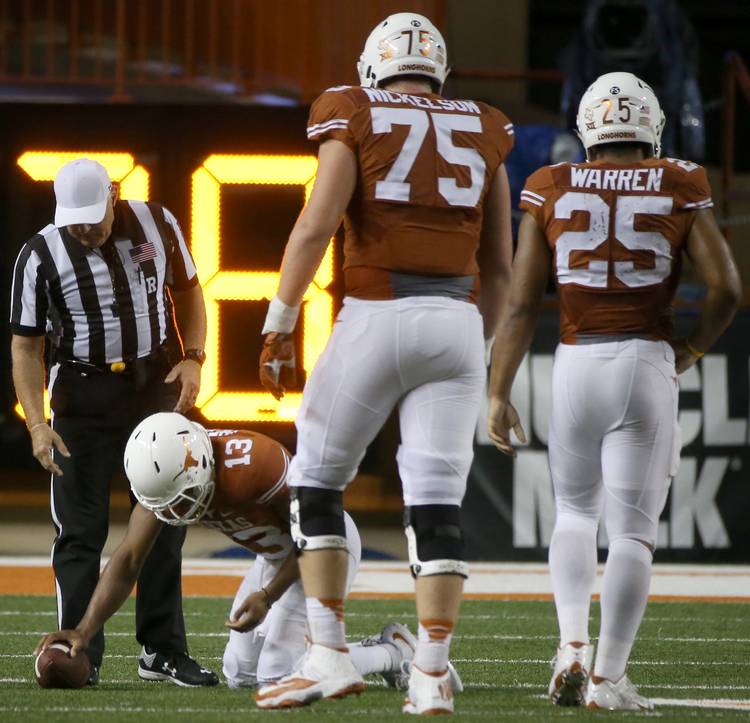 Texas quarterback Jerrod Heard is slow to get up after a hard hit against Texas Tech during the first half at Royal Memorial Stadium on Thursday, November 26, 2015. Heard would exit the game with a head injury. DEBORAH CANNON / AMERICAN-STATESMAN

With its sideline turning into a MASH unit, Texas did something it normally does not do and released a post-game injury report.

Among the seven players who did not finish Thursday’s 48-45 loss to Texas Tech was quarterback Jerrod Heard, who Texas announced had suffered a concussion in the first half. Heard’s availability for the Dec. 5 finale at Baylor is unclear.

So, to recap, by the end of the night, Texas was without eight starters, including the quarterback, running back, both linebackers and both interior defensive linemen. Remarkably healthy through nine games, the injury bug first set in two weeks ago at West Virginia when Foreman, Gray and Vahe all went down.

Many of Thursday’s injuries occurred during the second quarter, yet coach Charlie Strong said he wasn’t concerned.

“We ended up with a lot of freshmen on the field, but they went out and competed,” Strong said. “I wasn’t too concerned about guys not being out there. I didn’t think anything about it. Next guy up. We have to go play.”

At one point or another, Holton Hill, Shiro Davis and Poona Ford left the game with injuries. All of them returned.

No one took advantage of his opportunity more than No. 3 running back Chris Warren, whose 276 rushing yards are the most ever by a Longhorns freshman. Warren, who started and scored four touchdowns, was the team’s only available back after Johnson went down in the first half.

“Guys were hurt, guys got some playing time that they didn’t in the past and they did a tremendous job,” center Taylor Doyle said.

Injured players have more than a week to heal before Texas heads to Waco where Baylor will be starting third-string quarterback Chris Johnson. Without a bowl game to play for, it’s hard to see Strong taking any chances on one’s playing status.

There’s a chance, especially if Heard isn’t cleared, that Tyrone Swoopes will have started the first and the last games of the season but none in between.

Swoopes was 9 of 18 passing for 52 yards in relief of Heard and misfired deep to Daje Johnson on fourth down late in the game.

“We don’t have a lot of ready depth after those two guys,” Norvell said. “Nobody else has played. We’re hoping to get Jerrod back this week, but you never know with those types of injuries. A couple of extra days will help.”

By the looks of it, Jinkens’ career at Texas could be over; he watched the second half from the sideline on crutches and in a knee brace. That would be a shame, too, because he had put together a breakthrough season to become the defense’s MVP.

In the absences of Jinkens and Jefferson, Tim Cole and Anthony Wheeler registered eight tackles apiece.

With help from above, Texas Tech’s Jakeem Grant pulls in stunning TD catch