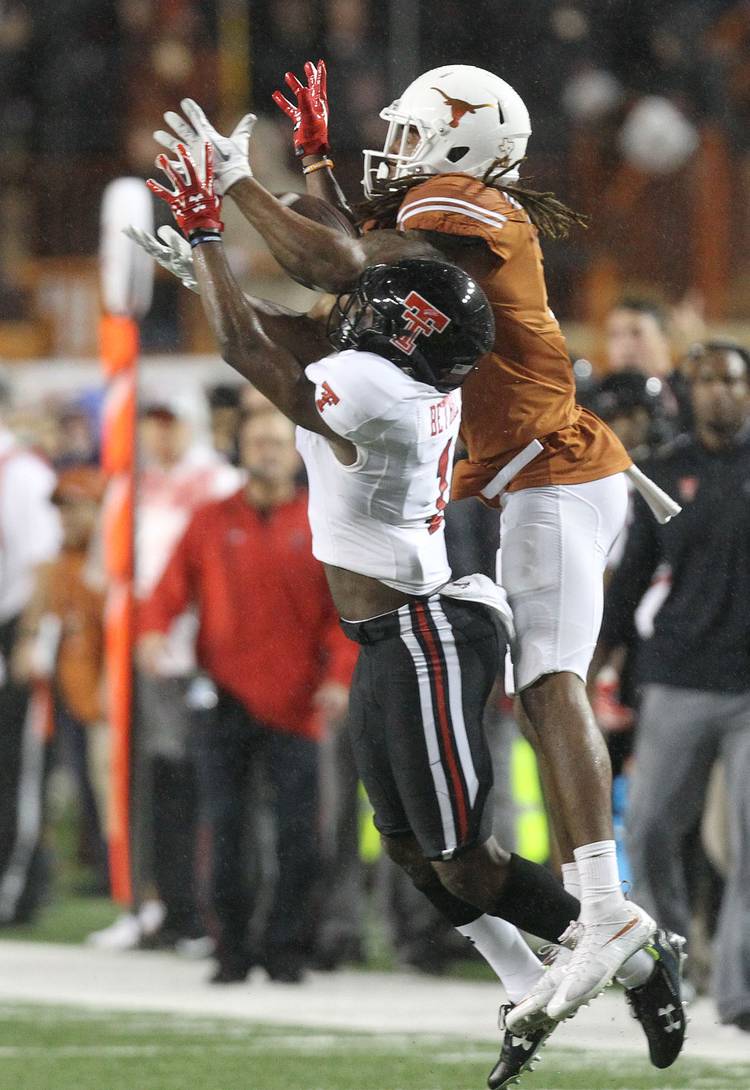 WHY TEXAS (4-7, 3-5) LOST: You can make excuses — the Longhorns were minus Jerrod Heard, Johnathan Gray, D’Onta Foreman, Patrick Vahe, Peter Jinkens, Desmond Jackson and Malik Jefferson, among others — but in the end, Texas was still in the game with 2 minutes left to play. A curious play call on a critical fourth-and-7 late in the game should rightly be questioned and criticized — Tyrone Swoopes, who had been 0-for-Thanksgiving when taking long shots downfield, not surprisingly threw incomplete on a deep throw to Daje Johnson, rather than look for something safer. Texas allowed 48 points, 293 rushing yards and 372 passing yards to the nation’s No. 3 offense. And the Longhorns managed only 64 passing yards and committed two turnovers, spoiling a record-setting night from Chris Warren III.

WHY TEXAS TECH (7-5, 4-5) WON: Too many weapons. The Red Raiders can boast a 4,000-yard passer, a 1,000-yard rusher and a 1,000-yard receiver for the first time in school history. Whenever Texas scored, Tech answered. The 665 yards of total offense marked the 52nd straight game that Tech has gone over 325 yards, which is the nation’s longest streak. Jakeem Grant bumped Michael Crabtree as Tech’s career leader in receiving yards, and UT freshman cornerback Holton Hill is probably still trying to figure out how Grant ended up with that crazy loose ball for a 65-yard score.

THE EYES OF TEXAS: … were on three specific Red Raiders— quarterback Patrick Mahomes, who was 89 yards away from a 4,000-yard passing season; running back DeAndre Washington, the Big 12’s third-leading rusher coming off a 248-yard, three-touchdown effort vs. Kansas State; and wide receiver Jakeem Grant, who was only 69 yards away from passing Michael Crabtree to become Texas Tech’s all-time leader in receiving yards. How’d they do? Mahomes passed for 372 yards and a touchdown, going over the 4,000-yard mark. Washington rushed for 173 yards and a pair of scores, becoming the first Tech player since 2008 to rush for 100 against Texas. Grant had only two catches, but they spanned 105 yards and a TD.

Offense — Who else? Warren, in his first start, had the sixth-best rushing performance ever for a UT player.

Defense — Dylan Haines had three tackles, two for losses, and his interception thwarted a Tech scoring threat on the game’s first drive.

Jeers …
(1) A second straight losing season. And no bowl game.
(2) Injuries really made this loss sting even more. It was a long night for the trainers.
(3) Texas’ passing game was anemic, and every Swoopes throw downfield were missed opportunities.

Texcetera: Tech’s win improved Kliff Kingsbury’s record to 19-18. It also dropped Charlie Strong’s mark at Texas to 10-14. … Texas is now 41-14-1 in games played on Thanksgiving. … Warren’s 276-yard night broke Cedric Benson’s UT record for most rushing yards by a freshman; Benson had 213 yards against Kansas in 2001. And Warren’s 91-yard touchdown run was the fourth-longest run in UT history and the longest by a freshman. … Swoopes has 11 rushing touchdowns on the season.

On deck: Baylor (Next Saturday, 11 a.m., ABC or ESPN). Texas is out of the bowl picture and has already secured its second straight losing season, the first time that’s happened since 1988 and 1989. An upset win over Baylor would equal the dismal 5-7 season of 2010.