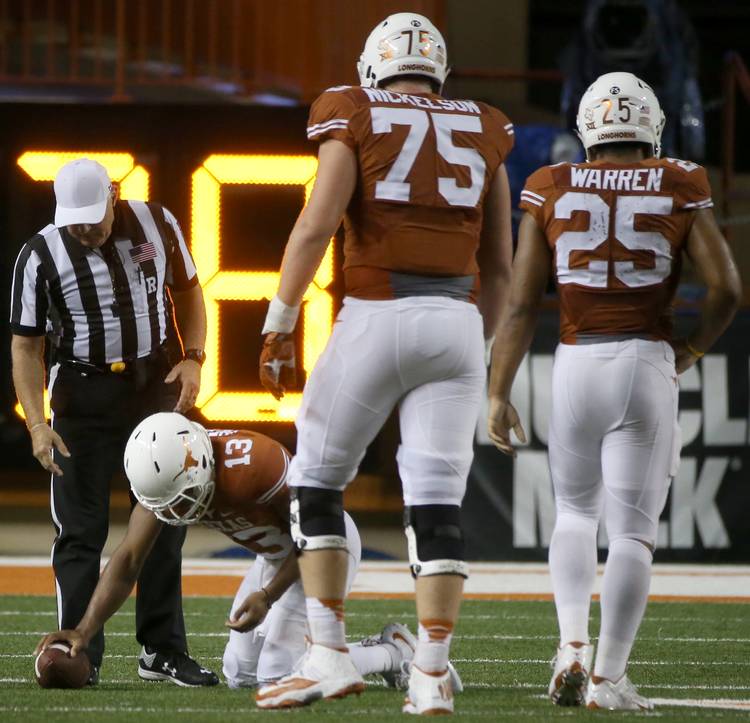 Texas quarterback Jerrod Heard is slow to get up after a hard hit against Texas Tech during the first half at Royal-Memorial Stadium on Thursday, November 26, 2015. Heard would exit the game with a head injury. DEBORAH CANNON / AMERICAN-STATESMAN

Charlie Strong wants to finish the season on a positive note against No. 7 Baylor. But can the Texas coach find 22 healthy starters?

The Longhorns (4-7, 3-5) have avoided major injuries this season for the most part. But that run of good fortune came to a screeching halt on Thanksgiving against Texas Tech.

Passing as positive news, running back Johnathan Gray is day-to-day, and “There’s a good chance he will be back,” Strong said.

Quarterback Jerrod Heard, who suffered a concussion against Tech, has been cleared to practice. But Strong said backup Tyrone Swoopes will be the starter as Texas faces what Baylor touts as #AmericasTopOffense.

NCAA officials will allow multiple 5-7 teams into the postseason just to fill up all 40 bowl games. However, those 5-7 teams will be determined by Academic Progress Rate, according to the NCAA. UT’s most-recent APR score of 958 probably won’t be high enough to qualify.

Strong was asked whether he should just bench Heard since the Longhorns have only fractionally-thin bowl hopes.

“The thing about Jerrod, he’s such a competitor,” Strong said. “I don’t know how severe it is, but it was a concussion. That’s why we’re going to make sure the doctors make the right decision.”

One player who will be ready is running back Chris Warren III. The Rockwall speedster was named the Big 12’s offensive player of the week for his UT freshman-record 276 yards and four touchdowns against the Red Raiders.

“It wasn’t as easy as it looked,” Warren said Monday. His 91-yard touchdown run was the longest ever by a UT freshman and was the second-longest play from scrimmage this season. “If it looked easy, I apologize.”

In previous years, the mere thought of playing Baylor would get Texas’ juices flowing.

This season, Bears coach Art Briles’ team may be out of the College Football Playoff running. But Baylor (9-2, 6-2) can still get into the Sugar Bowl with a win over Texas.

This is UT’s first trip to Waco since Baylor opened McLane Stadium, a $266-million palace on the banks of the Brazos River. The Bears are 10-1 at there, with the average margin of victory is 28.6 points.

“Just to get a win against them in Waco would mean something for our seniors,” Haines said. “We’re going up there to win, and that’s the mindset this week.”

The Horns will face a third-string quarterback in Chris Johnson. Seth Russell and Jarrett Stidham have both been lost to injuries. Johnson made his first career start last week against TCU in a driving rainstorm, flooding out both team’s offensive strategies. TCU won 28-21 in overtime.

Still, the Bears lead the nation with 50.8 points and 616 yards per game. Linebacker Tim Cole said, “Despite them having a third-string quarterback, we still have to respect them as an offensive threat.”

Despite the injuries and overall record, Strong said, “It’s our final game and we need to go out and go play well.”