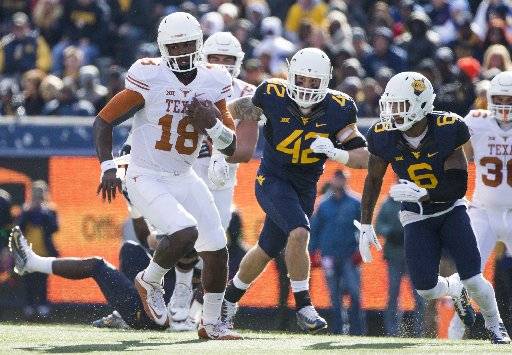 Tyrone Swoopes began this season as the starting quarterback, and he’ll end it the same way.

Only this time, Swoopes says he’s in a better place emotionally, crediting his 18-Wheeler running package for bringing confidence to his game.

“It’s shown me to just have fun,” he said. “In the past I took everything almost too seriously.”

With Jerrod Heard working back from a concussion, Swoopes will get the nod Saturday when Texas closes the season at Baylor.

On the year, Swoopes is completing 47 percent of passes (35 of 74) with three touchdowns and 386 yards. His first start, in the opener at Notre Dame, went poorly, and Swoopes was benched before a week two win over Rice. He’s been spending most of his team with the 18-Wheeler and leads the team with 11 rushing touchdowns.

“I don’t think there’s anybody on our team having more fun than Swoopes,” he said.

Is Saturday an audition to win back the job entering the offseason?

“Not looking too far into the future,” Swoopes said. “Definitely trying to get a win in this game.”