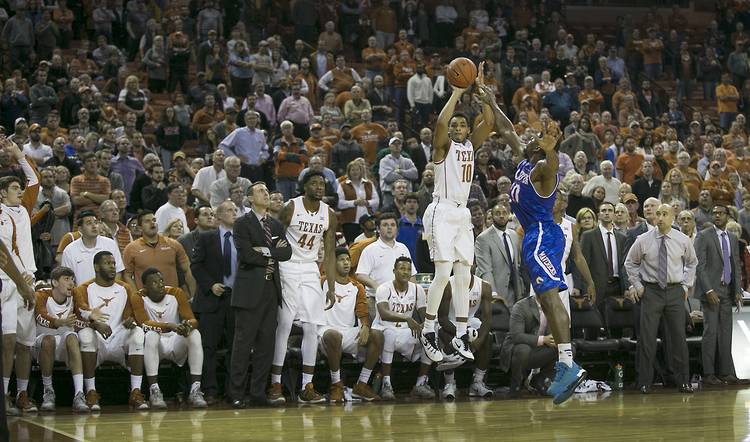 Texas' Eric Davis, Jr. puts up a three pointer late in the game to secure the victory over UT-Arlington 80-73 at the Erwin Center Tuesday night December 1, 2015 RALPH BARRERA/ AMERICAN-STATESMAN

Texas changed men’s basketball coaches, but five games into the season, could anyone really tell the difference?

In November, the Longhorns’ first five games under Shaka Smart could have been any one of a number of games the last few years under Rick Barnes.

Things may have changed Tuesday in an 80-73 overtime win over UT-Arlington, a team far, far more dangerous than its name implies.

One of Smart’s prized freshman, the electric Kerwin Roach, flashed down the middle of the lane. The two-time Class 5A triple jump state champion took off from the Big 12 logo and threw down an incredible, oh-my-goodness dunk, posterizing Jorge Bilbao and electrifying everyone in the process. It was nasty.

That dunk ended a scoreless stretch that lasted an agonizing 7 minutes, 34 seconds. Yep, that sounds like something Barnes’ teams would do. A Mavericks squad that nearly pulled off the upset in Austin last year still had a six-point lead and was primed to finish off their third major road upset of the season.

“In the arena, there was a heavy feeling of, ‘Uh-oh, what’s going to happen?,’” said Smart, who acknowledged that Roach’s dunk changed the atmospheric conditions both in the Erwin Center and the locker room. “We’ve got to play with an aggressive, confident, loose approach toward attacking the game.”

Taylor scored all of his game-high 21 points after halftime and went 13 for 17 from the free throw line. He tried an off-balance dribble drive in the closing seconds of regulation, but Taylor’s wild attempt never had a real chance. UTA missed a half-court runner, and both teams went to the extra period tied, 67-67.

Still, the Horns don’t get to the extra period without Taylor or Javan Felix, who had 18 points thanks to four 3-pointers. And they don’t survive without Connor Lammert holding UTA’s standout forward Kevin Hervey to 15 points on 5 of 17 shooting.

“These past couple of games, I’ve been in practice working around the basket, just making layups and getting used to the rim again,” Taylor said. “I missed some bunnies in early games that we played this year that I know I can make and will make throughout the longer stretch of the season. I’m not worried.”

Taylor hit two free throws with 2:09 remaining, then he kicked the ball to an open Lammert for a critical 3-pointer. Freshman Eric Davis followed on the next possession with a 3-point dagger of his own, and Texas evened its record to 3-3.

As in all five previous UT games, there were things to like and things that make Smart cringe.

UTA won the battle on the boards, 46-33, an eye-popping margin against a team that’s supposed to be strong inside. Cam Ridley grabbed 10 rebounds, but the overall offensive rebounding numbers were atrocious. UTA had 22 offensive rebounds, compared to Texas’ 11. That led to 21 second-chance points for the Mavs (5-2).

“I didn’t even realize that we out rebounded them by 13,” UTA coach Scott Cross said with true amazement. “That’s a credit to our guys.”

Smart said, “I’ll be honest with you, it’s an area where we’ve got to get way better.”

More than anything, Smart is finding that changing the basketball culture at Texas isn’t easy. His players, despite making back-to-back NCAA Tournaments, aren’t as confident as they should be. The fans aren’t as receptive as he probably hoped, either.

Football coach Charlie Strong once said he thought “I’d just push a button” and Texas would be good again. Smart is learning this will take time. If the UTA win was any indication, he might be on the right path.

“I thought there was a lot of people in this place kind of freaking out,” Smart said. “Everyone needs to relax and understand, this is a process that we’re trying to build a mentality. It’s on us as players and coaches to build that and get better.

“But if one or two plays, or a half or whatever doesn’t go our way, we’re not going to stop and throw our process in the trash,” he added. “We’re going to keep trying to build it.”

Swoopes back at starter, having more fun

Vance Bedford on staff changes: ‘Charlie hasn’t said anything to anybody’