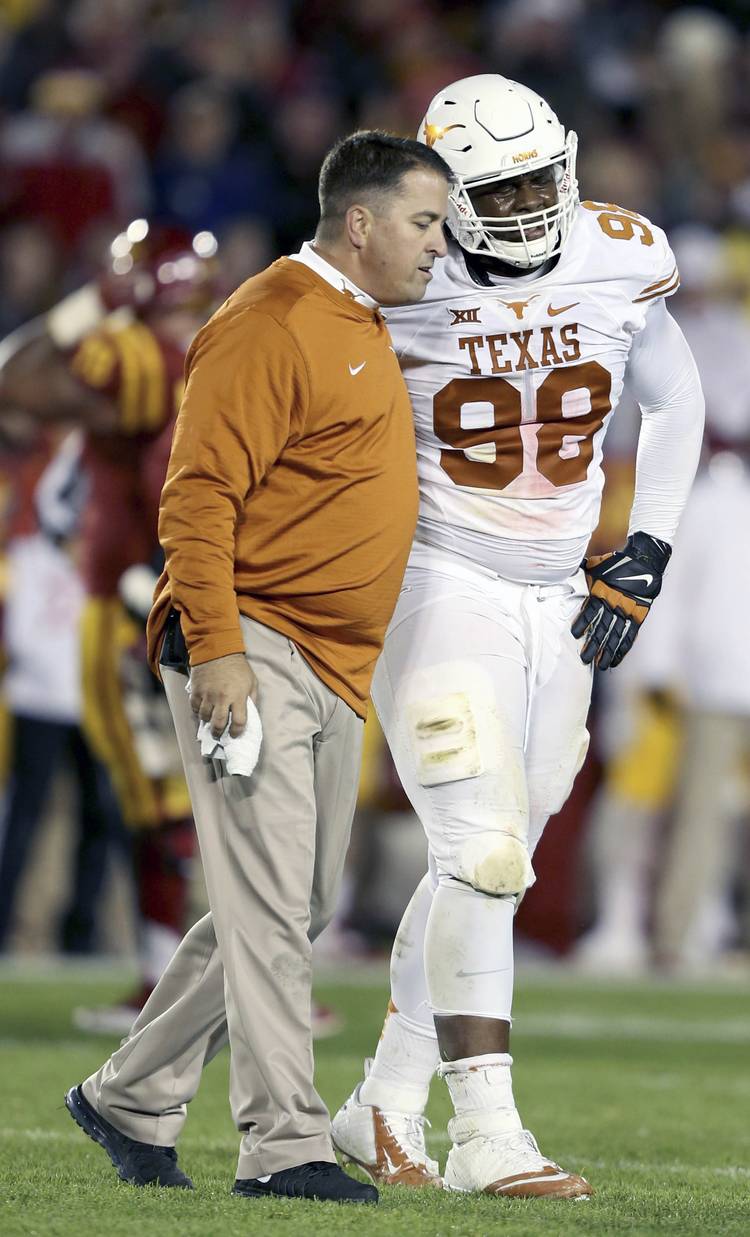 Texas defensive tackle Hassan Ridgeway is helped off of the field after an injury during the first half of an NCAA college football game against Iowa State, Saturday, Oct. 31, 2015, in Ames, Iowa. (AP Photo/Justin Hayworth)

Since becoming Texas’ coach, Charlie Strong has made a few claims that haven’t quite hit their mark.

This past preseason, he told reporters that Tyrone Swoopes looked “unbelievable” in practice. But after one game, Swoopes was demoted to backup. A year ago, Strong said that under his watch, Texas would never again lose five games in a season. The Longhorns have already dropped seven this season, with one difficult test at No. 12 Baylor to go.

Yet Strong’s biggest whiff, arguably, was the endorsement he gave of his defensive line, professing this preseason that it would be the strength of the team and that “1o to 12” linemen were ready to contribute.

It didn’t work out that way, and as a result, this year’s defense will almost surely out-stink the 2013 defense as the statistically worst in program history. Actually, it won’t be close. With perhaps more bruising to come against Baylor’s No. 1-ranked offense, the Longhorns are giving up 450.2 yards per game, a sizable difference from the record 407.2 yards that the Manny Diaz/Greg Robinson unit gave up in 2013.

This week, Strong expressed concern about the line’s play and also lumped the linebackers into his critique.

“We needed better play from a total front seven,” Strong said. “You would have liked to see better play and we should have been a lot stronger against the run.”

Gashed the past two times out by West Virginia and Texas Tech, Texas’ run defense ranks No. 102 nationally at an average of 203 yards. Seven of its opponents have rushed for 200-plus yards, and the Longhorns have beaten only one of them, Rice. Oh, and Baylor ranks fourth nationally with 291 yards rushing per game.

So how did this get to a point where Strong misfired so badly on the line? Injuries played an early role. Desmond Jackson never looked the same after undergoing foot surgery. Hassan Ridgeway and Poona Ford labored through their own health issues in camp and were limited in the opener. That softened up the middle of the line, where Texas figured to be sturdy even with the loss of first-round draft pick Malcom Brown.

Derick Roberson, whom defensive coordinator Vance Bedford thinks is the team’s best pass-rusher, was slowed in the offseason by shoulder injury. He got healthy, was expected to play significant snaps against West Virginia in game 10, and then was injured again.

“He got nicked up at the wrong time when it was time for him to play,” Bedford said.

Not coincidentally, Texas’ upset win over Oklahoma came when the line “might’ve been the healthiest we’ve been, the fastest we’ve played,” Bedford said.

Other linemen did not produce. Shiro Davis had designs of a breakout senior season, but he was stuck on one sack before picking up another on Thanksgiving against Texas Tech. Caleb Bluiett, who would’ve been in the mix at end, switched to tight end in camp and played only a handful of snaps on defense.

And that’s about it. There’s the 10-plus linemen Strong said he was counting on before the season got underway.

It’s a bad look for Bedford and line coach Brick Haley, but also for Strong, who is expected to revamp his coaching staff after Saturday. Most of the changes are expected on offense, but Bedford admitted he’s concerned about his job status.

“You always as a coach have concerns about that,” he said. “Charlie hasn’t said anything to anybody, but as a head coach that’s what they’re supposed to do. To keep coaches working hard, keep them on the edge, a lot of times you don’t tell them certain things therefore they stay motivated.”

Vance Bedford on staff changes: ‘Charlie hasn’t said anything to anybody’