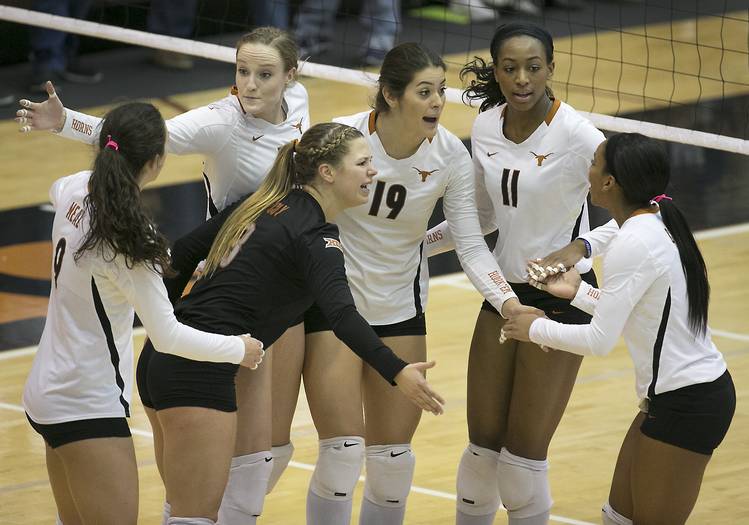 Some may view it as an unfair advantage, but don’t expect the Texas volleyball team to offer up any apologies. If all goes as planned, the third-seed Longhorns won’t leave Austin or Gregory Gymnasium this postseason until the Final Four.

Perhaps more so than having a powerful hitter or a skilled setter, home court advantage can be a gigantic edge at this point of the year.

Yet Elliott is cautious: “We can only play in this gym if we win.” Texas, the top seed in the Austin regional, opens play Thursday against Fairfield, the champion of the Metro Atlantic Athletic Conference. First serve is scheduled for 7 p.m. and will follow an enticing first-round matchup between SMU (27-5) and Purdue (22-9). SMU is making its first ever postseason appearance; Purdue, of the rugged Big Ten, narrowly missed securing one of the 16 seeds in the field.

If the Longhorns (25-2) can get through this week, they’ll turn around and play at home again in the regional next week. They are the only seeded team in the 64-team field that has a chance to play a regional in their home gym.

To prepare for this possibility, Elliott went heavy on home dates, scheduling three tournaments at Gregory to open the season.

“We knew we had an opportunity to do this and get comfortable in our gym,” he said.

Among teams who’ve played at Gregory this season are tournament participants Nebraska (No. 4), Kansas (No. 9), Florida (No. 11), Colorado State, Santa Clara, and the Big 12’s Kansas State, Iowa State and TCU.

The regional field could feature No. 6 Wisconsin, No. 11 Florida and No. 14 UCLA.

“Being at home is a good advantage and we’re very grateful for that,” outside hitter Paulina Prieto Cerame said. “… Our fans are amazing and Gregory Gym is a crazy volleyball gym nationally.”

Other regional sites are San Diego, which will be free of host USD unless the Toreros knock off top-seeded USC in the second round; Lexington, where Kentucky is unseeded; and Des Moines at Wells Fargo Arena, a minor league facility.

The Final Four goes down Dec. 17 and 19 at the CenturyLink Center in Omaha.

Texas secured a bid in 2012 to host the regional because of location, fan support and facilities. Starting next year, this won’t be unusual as the NCAA has changed its format to hand the top four seeds regional hosting privileges.

Texas last hosted a regional in 2012 when it swept Florida and USC to earn a berth to the Final Four in Louisville. There, the Longhorns captured the national title with wins over Michigan and Oregon. This year’s seniors, Amy Neal, Molly McCage and Kat Brooks, and redshirt junior Nicole Dalton, were freshmen that season.

Though not necessarily the favorite, Texas is rightly feeling confident about its chances. Backed by Neal, the Big 12’s player of the year, the Horns are ranked No. 2 nationally in hitting (.316) and have recorded 19 sweeps. McCage, Prieto Cerame, Chiaka Ogbogu and Chloe Collins were all named to the conference’s first team.

“I really don’t think we’ve peaked, which is a good thing,” Prieto Cerame said. “Jerritt emphasizes that a lot, that we don’t want to peak too early.”

Expected to be a strength, Texas’ D-line came up short this season