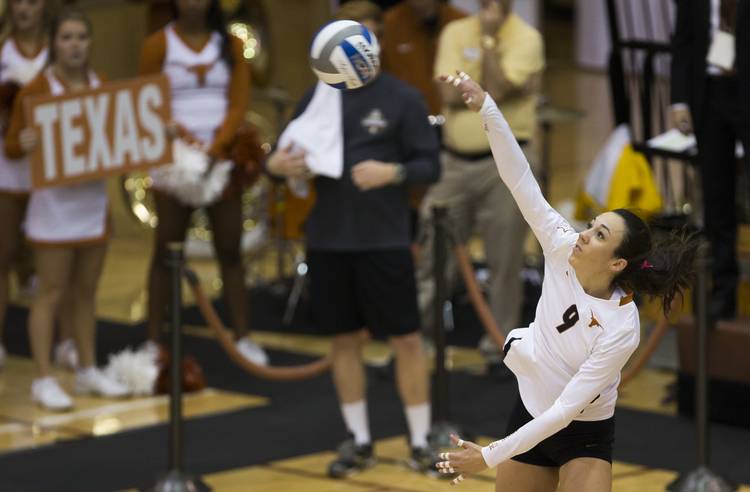 Texas's 9 Amy Neal delivers the ball to Fairfield Stags' during the first half of an NCAA first and second Round women's Volleyball basketball game at Gregory Gymnasium in Austin, Tex., Thursday, Dec. 3, 2015. RICARDO B. BRAZZIELL/AMERICAN-STATESMAN

Before cutting them loose for the evening, Jerritt Elliott had a simple directive for his Texas volleyball team.

Get some sleep. Nine hours for all, more for some.

Elliott sensed that his team, which was cramming for exams and fighting through papers all week, was tired. So did everyone else at Gregory Gymnasium, where the third-seeded Longhorns slogged their way to a sweep of Fairfield in the opening round of the NCAA tournament Thursday night.

A similar effort in Friday’s second round would be cause for a bigger concern. The level of difficulty rises against Purdue, which dispatched SMU in four sets on Thursday. The Boilermakers, who nearly earned a seed for the tournament, finished fifth in the competitive Big Ten and recently beat Minnesota, the No. 2 overall seed.

“We’re gonna have to be very good to play with Purdue because they have very physical athletes,” outside hitter Amy Neal said.

Neal was the star of the night, twice freeing the Longhorns from trouble at the service line.

After four consecutive Fairfield points cut Texas’ lead in the first set to 18-15, Elliott called time out. The Stags, winners of the Metro Atlantic Athletic Conference, had come to play from Connecticut behind maybe 50 of their fans. Neal responded with a kill, and then came to the line and ripped off three points for a 22-15 edge.

In the second set, Fairfield (21-10) again made things interesting, taking a 14-11 lead. Neal tied it at 15-15 before she stepped to the line and rattled off eight points in a row. Her jump topspin serve was on point, once hitting the court before any Fairfield player could get a hand on it.

“I know getting the (opponent) out of system is important, so I’m just trying to get them less options than a three pass,” she said.

Fairfield got nine kills out of Skyler Day and six from Megan Theiller, who lived in Pflugerville when she was young and was a regular at Texas games. Theiller, the MAAC tournament MVP, now lives in New York.

Physically, Fairfield was overmatched with its slew of 5 feet, 10-inch hitters battling a Texas squad that started 6-4 Yaazie Bedart-Ghani, 6-3 Molly McCage and 6-2 Chiaka Ogbogu. Together, the Horns had 16 blocks, McCage accounting for seven of them. Somehow, 5-7 setter Chloe Collins chipped in with five.

So how does an undersized opponent prepare for Texas’ length? Well, last year Northwestern State practiced with snow shovels before its first-round matchup with the Longhorns. Fairfield didn’t have an answer in practice, so coach Todd Kress, who probably goes 6-2 or so, stood at the net and tried to block shots.

“That was something we can’t prepare for,” Kress said. “We knew what we were up for.”

Elliott suggested his team’s size, at times, was detrimental.

“We have some really physical players in our gym and (Fairfield players) play with different rhythm and different timing with their arm swings than we see on a daily basis,” he said.