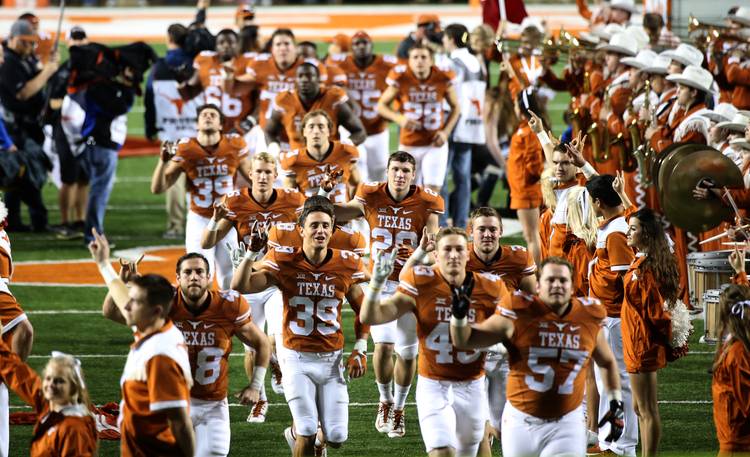 It’s been 18 years since the Longhorns went into a regular-season finale with nothing to play for. No championship. No bowl berth. Nothing.

In 1997, Texas was 4-6 going into the season ender against No. 15 Texas A&M. Ricky Williams ran for 183 yards and scored twice that Thanksgiving day at Kyle Field, locking up the Division I rushing title. But A&M won by 11, securing UT’s second-worst season since 1956, and coach John Mackovic was fired.

The present-day Longhorns find themselves at a similar low point. Texas is 4-7 going into Saturday’s finale in Waco against 12th-ranked Baylor, a team angling for a spot in the Sugar Bowl. The Bears started the week at 20.5-point favorites.

“I need a very lively and energetic stadium on Saturday at 11 a.m. to help our seniors finish out,” Baylor coach Art Briles told his fan base.

It was thought early in the week that if Texas could beat Baylor and finish 5-7, the Horns might slip into one of the 40 bowl games scheduled this season. However, the NCAA went through a sloppy, confusing explanation process, giving the illusion UT has an infinitesimal chance at a bowl berth.

The NCAA announced it will use Academic Progress Rates to determine which 5-7 teams get into the five remaining slots needed to fill out 40 bowl games. Nebraska, Kansas State and Minnesota are among the teams with higher APR scores than Texas.

It’s theoretically possible enough 5-7 teams opt out of playing in a bowl game, like Missouri did, so that bowl organizers get down to Texas. But extremely unlikely. UT athletic officials are planning on Saturday’s game being the final one of the season.

“I think our guys will still go out and compete, because they don’t want to get embarrassed,” Texas coach Charlie Strong said. “And they know this, that it’s their last game, and for the seniors it is their last game.”

The Longhorns will be without linebacker Malik Jefferson and safety Dylan Haines, two players injured last week against Texas Tech. Jefferson is second on the team in tackles, and Haines has a team-high five interceptions this season.

Quarterback Jerrod Heard, who suffered a concussion against Tech, will make the trip to Waco. However, Strong said backup Tyrone Swoopes will start. It’s unclear whether Heard would play if Swoopes gets injured, or whether Texas would go to reserve Trey Holtz. Coaches do not want to pull the redshirts off Kai Locksley or Matthew Merrick.

“It’s important to take a positive note into the offseason,” Swoopes said. “No one likes what happened this year, but it’s what happened and we have one game left and we should go out and try to win it.”

If the Bears’ offense manages modest totals, the Longhorns’ defense will finish the season as the worst statistical unit in school history. Baylor averages 616 yards and 50.8 points per game.

“For me, I get one more Saturday I get to play against Baylor in Waco, Texas,” UT defensive tackle Desmond Jackson said. “I want to go out there just knowing how much this university means to me, and a lot of them understand that, as well, so they want to give the same effort.”

No matter what happens in Waco, Strong is not in danger of being fired this season. UT administrators who have spoken with the American-Statesman are quite clear on that. However, the narrative changes after Saturday’s game.

It’s believed Strong, who is 10-14 so far, will make changes to his offensive catching staff. TCU co-offensive coordinator Sonny Cumbie has emerged as the leading candidate to become UT’s play-caller next season.

The Statesman reported on Thursday that Cumbie is expected to meet with Strong next week. No deal has been finalized, though. Mike Perrin, who was named the permanent athletic director on Thursday, told the Statesman there is no pre-set cap on what UT will spend on a new play-caller. “Not at present,” he said.

Strong is expected to move quickly. The NCAA-mandated dead recruiting period begins Dec. 14. It’s in Strong’s best interest to get the word out how UT will proceed. Every move will be scrutinized leading up to next year’s season opener at home against Notre Dame.

One day at a time, though. Losing to Baylor is one thing. Getting blown out with little explanation as to why — like the Iowa State loss — is something totally different.

“We don’t have a choice but to finish this season, and I think that boils down to pride and moral fiber,” UT senior center Taylor Doyle said. “But I don’t think we’re going to lack motivation in the locker room or with the staff this week.”

Texas vs. Baylor: The Eyes of Texas will be upon whom?