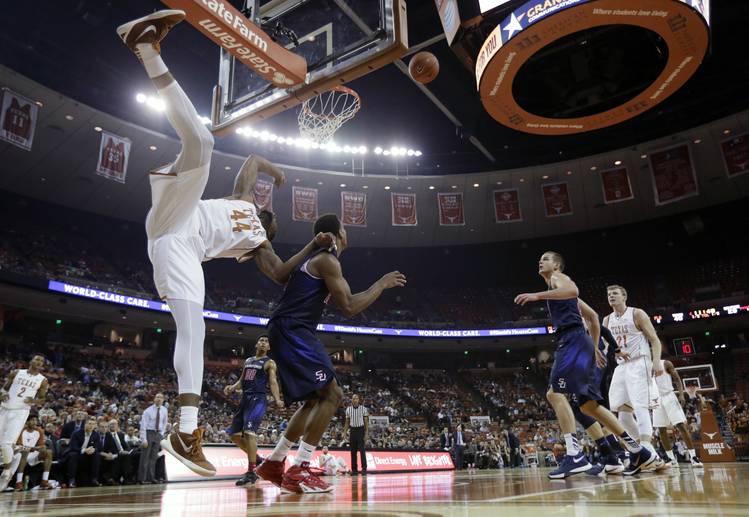 It’s too early for anyone to formulate declarative thoughts about the Texas men’s basketball team. This team may be good, it may be average.

Ninth-ranked North Carolina will sway opinion one way or the other come Dec. 12.

But clear trends are emerging, and Friday’s 59-49 win over Samford at the Erwin Center only brought things more into focus.

First and foremost, center Cam Ridley is off to the best start of his career. The senior scored 14 points, grabbed nine rebounds and became the third player in school history to block 200 career shots. With four blocks against the Bulldogs, Ridley is sitting at 202 and counting.

Samford coach Scott Padgett referred to the 290-pounder both as a monster and a horse in the post-game press conference. “Who’s the monster and who’s the horse?,” UT senior Demarcus Holland said.

“So far, I’m having a really good year,” said Ridley, now shooting 71.7 percent through seven games. “Biggest thing for me is to try to stay consistent.”

Someone needed to have a strong night, considering Isaiah Taylor was slowed by an ankle injury suffered Tuesday against UT-Arlington. Center Prince Ibeh played only nine minutes after taking a nasty spill that may have left him with a damaged tailbone.

In previous games, coach Shaka Smart called for the Longhorns (4-3) to press sporadically. He pushed the gas pedal a little more against the Bulldogs. Texas showed three-quarter press at times, a full-court press at others and no hesitancy to get into it off made baskets or inbound plays.

“Aww, we’re so far away from where we want to be with that,” Smart said. “You wish you could go out two hours a day and work on the press.”

Even in its rudimentary stages, the Texas press was good enough to confound Samford. Marcus Johnson scored on a fast break with 10 minutes, 36 seconds remaining in the first half, but the Bulldogs could get only seven more points before halftime.

Samford opened the second half with an impressive set play for a layup. But Demarcus Holland hit a rare 3-pointer as Texas took an 11-point lead. Then, Christen Cunningham threw the ball away on an inbound pass, and Holland collected two easy points. Wyatt Walker lost the ball out of bounds, and after the turnover, Holland quickly scored again.

Ridley’s dunk with 14 minutes, 40 seconds remaining gave Texas a 40-22 lead, and in all reality it was over.

The Horns didn’t have a bunch of stats to crow about. The final box score credited Texas with only two steals, and Samford had 13 turnovers. But the Bulldogs shot 34 percent, and went 3-for-18 over a 17 minute, 45 second span bridging the two halves.

Texas’ defensive press, while nowhere near a remotely finished product, was a big reason why.

“We have a lot of confidence in our press, but we’re still building that confidence,” said Holland, who finished with nine points. “It makes you want to press more, because you like that feeling of getting the easy steal and easy bucket.”

Those hallelujahs you hear are coming from the Texas coaches, specifically assistant coach Mike Morrell, who oversees the various press defenses.

Smart’s teams at Virginia Commonwealth ate, slept, lived and died with the press. Playing the Rams was a hellacious experience. But Smart warned not to get caught up in just steals and turnovers as markers of success.

“Remember, the goal on defense is just to stop the other team,” Smart said. “If you can force them to take a bad shot or eat a bunch of time off the clock and they don’t get a shot off, whatever it is, that’s success, too.”

Texas grabbed only eight offensive rebounds and made just 6 of 21 shots from 3-point range, so it wasn’t perfect by any stretch. But as Smart keeps reminding everyone, this is a process.

“We still adapting to rebounding better and getting more stops on defense,” Holland said. “But everybody’s bought into the process.”