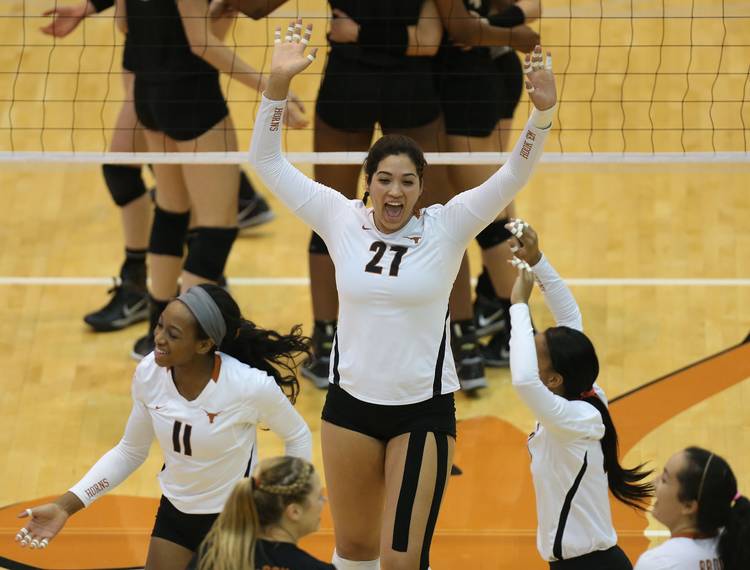 Texas Yaasmeen Bedart-Ghani(27) and Chiaka Ogbogu(11) celebrate a point against Purdue during the second round of the NCAA volleyball tournament at Gregory Gym in Austin, Texas Friday, Dec. 4, 2015. (Stephen Spillman for AMERICAN-STATESMAN)

On Friday morning, Jerritt Elliott arrived at his office and began scouting Texas’ next opponent in the NCAA tournament.

He identified a problem. Purdue, with a towering presence at the net, figured to cause some trouble for such undersized Longhorns as Amy Neal and Chloe Collins.

Purdue, still smarting over being denied a national seed, proved to be a handful, nearly forcing a fifth set before Neal put away the Boilermakers with consecutive kills.

“That was a Final Four-type match,” Elliott said.

Elliott’s club, seeded third overall, advanced to a regional for the 10th straight year, a remarkable run of consistency that began when these current Longhorns were 10 years old or so. They’ll return to Gregory on Friday to play No. 14 UCLA, a five set winner over Michigan. No. 6 Wisconsin will take on No. 11 Florida in the other semifinal.

The match began like many others, a first-set dismantling that had a crowd of 2,072 feeling at ease. To the casual observer, Purdue looked more like, say, Fairfield, which Texas had beaten the night before, than Minnesota, the tournament’s second-seed that fell to the Boilermakers two weeks ago.

But Purdue had encountered too many battles in the Big Ten to just fold, and it fired back in set two behind some impressive blocking. The 14 points Texas scored marked a season-low for a full set, and the Longhorns’ hitting percentage, a negative .030, was equally alarming considering they entered the tournament with the nation’s second-ranked hitting percentage. Of the 10 attack errors, Neal and Chiaka Ogbogu, perhaps the team’s top two players, accounted for three apiece.

Purdue was deadly with the block as well as with short serves, earning this praise from Elliott:

“Quite frankly, we had them right where we wanted them,” Purdue coach Dave Shondell said.

Purdue’s resilience may have caught Texas by surprise.

“They didn’t let off once,” Molly McCage said. “A lot of times we sneak in whenever a team starts backing off a little bit. I think we expected that, but they were not willing to do that at all.”

McCage finished with nine kills on .304 hitting, and Neal for the second night in a row led the team in kills with 17. Freshman Yaazie Bedart-Ghani was a surprise part of the game plan and responded with nine kills on 21 swings, the exact same numbers put up by Ogbogu.

Texas was officially on upset alert in set three, trailing 7-3 when Elliott called a timeout. Asked what he told his team, he claimed to have “amnesia,” but whatever advice he gave them was effective. Ogbogu scored and then came to the service line, where she ripped off three more points for a 9-8 lead. Texas got the cushion it needed, 20-16, on kills by Bedart-Ghani and Neal, who scored the 20th, 22nd and 23rd points.

The fourth set was another dandy. Ogbogu had a stuff at the net and followed with a set — not her speciality — to Paulina Prieto Cerame for an 18-15 edge. Purdue cut the lead to 21-19 when Nicole Dalton and Cat McCoy miscommunicated on the back line, and then forced a tie, 22-22, when McCoy let one drop thinking Neal would take it.

Back and forth it went before Neal scored the final two points. Running off the court, she received a hug from her coach.

“We had all we could have handled and more,” Elliott said.

Staff takes: All signs point to a big day for Briles, Baylor