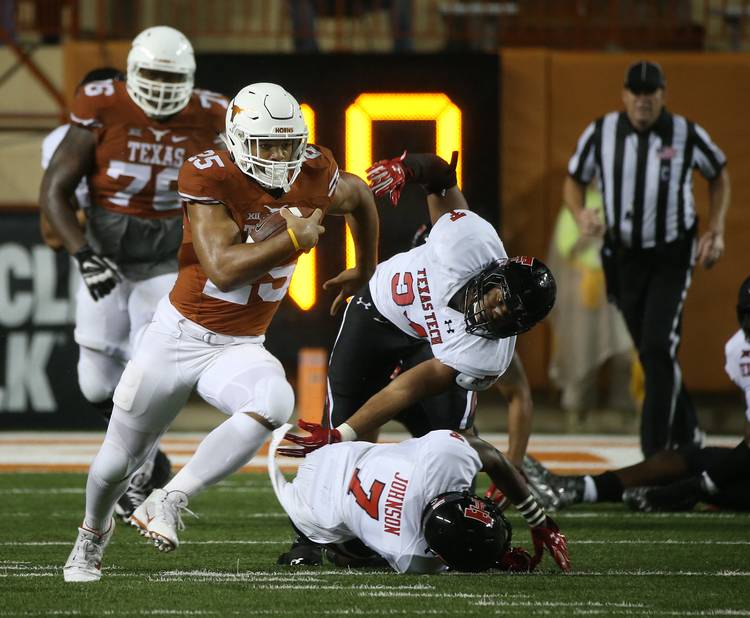 1. What will Chris Warren III do for an encore?

It says here Warren won’t duplicate his outrageous 276-yard, four-touchdown effort from a week ago against Texas Tech. Sorry Chris, but Baylor figures to put up more resistance than Tech’s leaky defense. With D’Onta Foreman out and Johnathan Gray limited by turf toe, it’ll be Warren’s show again. It’s also unknown if No. 4 back Kirk Johnson will be able to play. If Warren has another good showing, he will be the toast of offseason chatter and solidify himself as one of the cogs in what looks like an excellent freshman class.

2. Will Texas hold Baylor to under 200 rushing yards?

It had better. When an opponent clears 200 yards, the Longhorns are just 1-6, the lone win coming when Rice had possession most of the game. Baylor poses a formidable test, averaging 291 yards on the ground, fourth most in the nation. Shock Linwood (1,298 yards, 10 TDs) will be a load to handle for a defense that will be without two linebackers (Peter Jinkens and Malik Jefferson). This week, Longhorns coach Charlie Strong said he had hoped to see better play this season from his front seven.

Swoopes has proven to be indestructible. If that were to change, his coaches would have a tough decision on their hands. Jerrod Heard is coming off of a concussion and may not be willing to risk his health in a relatively meaningless game. There’s a chance freshmen Kai Locksley or Matthew Merrick would burn their redshirt, though play-caller Jay Norvell said that’s not ideal. Plus, Locksley is opposed to doing that, tweeting “I’m not burning my redshirt this late in the season.” That might leave it up to walk-on Trey Holtz if something happens to Swoopes.

4. Will DeShon Elliott make an impact?

Elliott figures to see extended playing time for the injured Dylan Haines. The last anyone saw much of Elliott, he picked off two passes in a blowout win over Kansas. Things were looking up for the freshman, but then he stopped playing. Why? Defensive coordinator Vance Bedford chalked it up to a game of math, telling the media that if at practice a player makes an interception but also gives up three touchdowns, it’s a net loss. In other words, Elliott is viewed as a liability at this point in his development.

Texas vs. Baylor: The Eyes of Texas will be upon whom?

Texas vs. Baylor: Matchups that matter