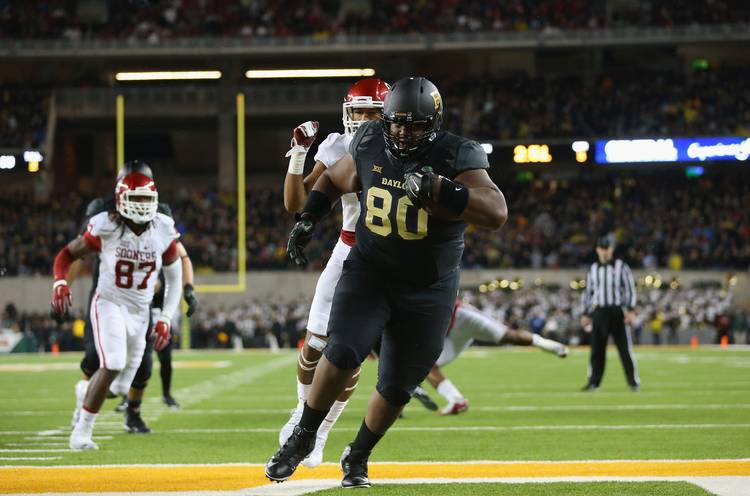 WACO, TX - NOVEMBER 14: LaQuan McGowan #80 of the Baylor Bears on a touchdown pass reception against the Oklahoma Sooners in the third quarter at McLane Stadium on November 14, 2015 in Waco, Texas. (Photo by Ronald Martinez/Getty Images)

McGowan is the 410-pound tight end Baylor likes to use on the goal line. Both of his two catches have gone for touchdowns, but he’ll also line up as a battering ram on running plays. This week, Longhorns defensive coordinator Vance Bedford compared McGowan to a Clydesdale horse and his defensive backs to flies trying to pester him. It’ll take a swarm of flies to bring down this load.

Bedford’s comparisons didn’t end there. He likened Baylor receivers to a 400-meter relay team and wondered aloud how his young backs could stay with Corey Coleman (1,314 yards, 20 TDs), KD Cannon (802, 6) and Jay Lee (721, 8). It’ll be a monumental task for freshman corners Holton Hill and Davante Davis, but then again, it’s not a given Baylor will be able to get its play-makers the ball due to injuries at quarterback.

Tyrone Swoopes is making his first start since the season opener, when he lost his job after a poor showing at Notre Dame. He has remained involved offensively, running for 11 touchdowns in the 18 Wheeler package, but there are questions about his ability as the full-time QB. Baylor is down to its third option, Chris Johnson, following season-ending injuries to Seth Russell and Jarrett Stidham. In his first start last week, Johnson was impacted by a rain storm at TCU and finished 7 of 24 passing. Like Swoopes, Johnson is big and can run. Unlike Swoopes, he’s surrounded by play-makers.

It’s one thing to run over Texas Tech, but it’s another thing to do it against Baylor. Bears linemen Andrew Billings and Shawn Oakman will limit space with which Warren has to operate, so don’t expect another 267-yard, four-touchdown performance out of the freshman. Still, Warren will have his chances. Though he’s not speedy, if he gets by the big boys up front he’s strong enough to power through tacklers at the second level.