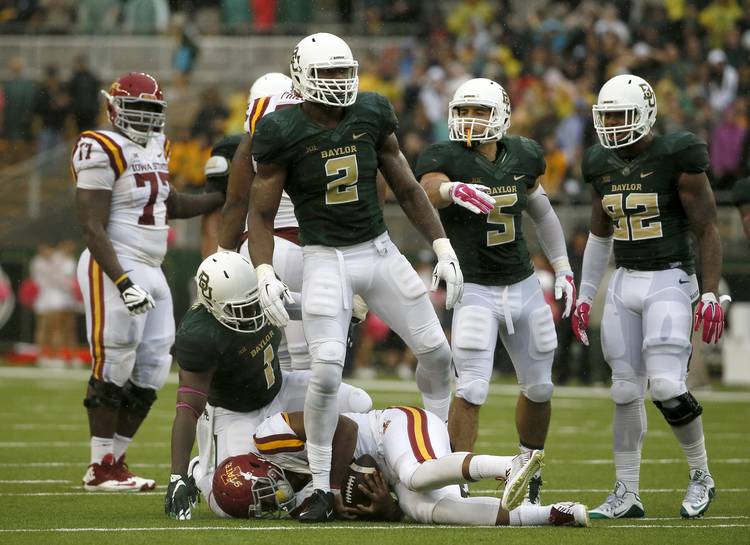 On Saturday against Baylor, the Eyes of Texas will be upon …

Down its top two quarterbacks, expect Baylor to pound Linwood and carve away the nation’s No. 102 rush defense. In last year’s win at Texas, Linwood (1,298 yards, 10 TDs) rolled for 148 yards and a short touchdown as Bryce Petty and the passing game struggled. Linwood, a junior, was a first-team All-Big 12 back a year ago and will likely be there again this year.

Though perhaps no longer a Heisman Trophy candidate, Coleman remains the No. 1 weapon on the nation’s No. 1 offense. He’s already scored 20 touchdowns, though none of those have come in the past three games. In fact, Coleman had just one catch for eight years in last week’s downpour at TCU. The junior from Richardson is up for the Biletnikoff Award, where he’ll get competition from TCU’s Josh Doctson. Coleman scored a 30-yard TD against Texas last year.

There has been chatter that Oakman had a down year. That may be true, but most pass-rushers would kill for his stats — 4.5 sacks, 13.5 tackles for loss, seven QB hurries, two forces fumbles. Last year, he set a high bar with 11 sacks and 19.5 tackles for loss. Struggling or not, Oakman will command the attention of tackles Connor Williams and Tristan Nickelson. Look out, Tyrone Swoopes, there’s a 6-9, 275-pound man gunning for you.