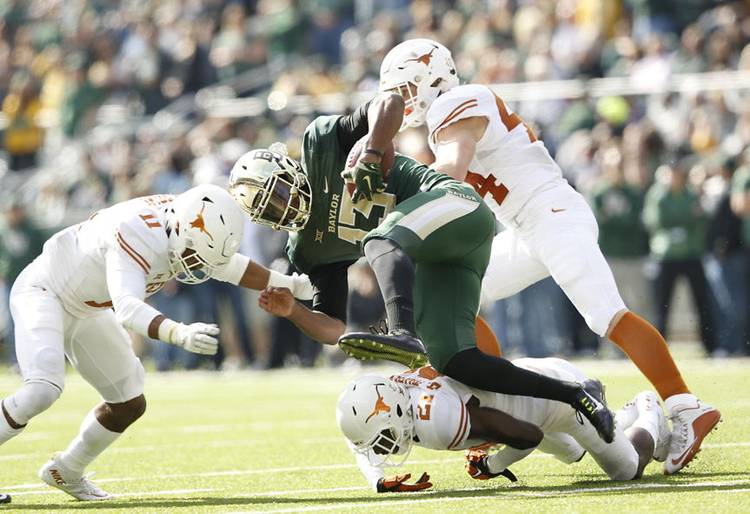 Baylor quarterback Chris Johnson loses a fumble after a hits from Texas defenders Duke Thomas and P.J. Locke III. Texas recovered for a turnover and Johnson left the game with an injury and at McLane Stadium, Dec. 5, 2015. (JAY JANNER / AMERICAN-STATESMAN)

Baylor coach Art Briles is the mastermind. Reduced to playing his fourth-string quarterback who is listed as a wide receiver, Briles went exclusively to the Wildcat offense and churned out 69 yards on eight plays for a touchdown. The Bears ran out of that alignment for 15 of their first 19 plays in the third quarter and finished with 395 yards rushing.

A couple of them, actually. Twice on third-and-5, Texas had gimpy Tyrone Swoopes running into the line for little or no gain. As a result, the Horns got a 53-yard field goal and a punt on those two possessions. Play-caller Jay Norvell admitted he called a conservative game in the second half after leading 20-0 at intermission.

Finally someone other than Charlie Strong had some misfortune. Baylor started with its third-string quarterback, but Chris Johnson was knocked out of the game in the first quarter. He was replaced by Lynx Hawthorne, a junior from Refugio who hadn’t even played quarterback since his junior season at Weimar before he transferred.

One of them, anyway, was the stop of Orion Stewart by none other than Texas kicker Nick Rose, who was short and wide on his 53-yard field goal try in the second quarter.

From the get-go, Texas’ defense was salty. It stopped Baylor’s No. 1-ranked scoring offense on a fourth-and-1 at the Texas 30 when defensive tackle Poona Ford tackled running back Shock Linwood short of a first down. It sent the right message that Texas was not going to be a pushover.

Hawthorne’s hard but legitimate tackle of Texas’ Duke Thomas after his interception triggered a sideline fracas. Texas’ P.J. Locke shoved Hawthorne and safety Kevin Vaccaro taunted Baylor receiver Corey Coleman, who headed toward the scrum and drew a flag for unsportsmanlike conduct. About a third of the Bears team poured onto the field.

Kidding, right? Texas scored on its third play of the game and three times in the first quarter for a 17-0 lead. Not since they opened with three consecutive touchdowns against Rice had the Longhorns come out of the box so strong.

Not sure McLane Stadium doesn’t have the best press box in the Big 12 and probably the whole state. Spacious areas, great work room, terrific seating. However, the open windows make it very, very loud.

Texas vs. Baylor: Horns up, Horns down, plays of the game