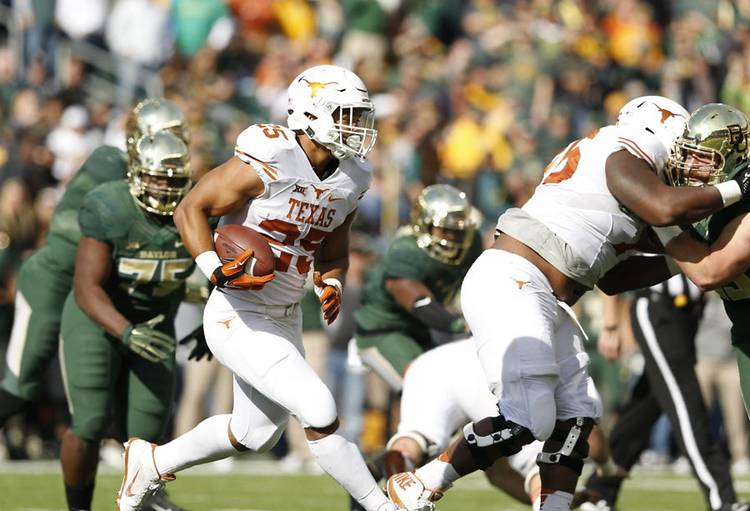 Texas running back Chris Warren III runs in the first half against Baylor at McLane Stadium, Dec. 5, 2015. (JAY JANNER / AMERICAN-STATESMAN)

On Saturday morning, we asked four questions about the Texas-Baylor matchup.

WHAT DID CHRIS WARREN III DO FOR AN ENCORE?

A 100-yard game.  Warren had 28 carries (three more than last week) for 106 yards (170 less), with one long run of 26 yards. He averaged 3.8 yards a carry. Saturday gave us the chance to put Warren’s 276-yard, four-touchdown night on Thanksgiving in perspective, since Texas Tech was one of the worst run defenses in the country. Not having Johnathan Gray, D’Onta Foreman, Kirk Johnson or Jerrod Heard to eat up carries, Warren closed his 2015 season with back-to-back big games.

DID TEXAS HOLD BAYLOR TO UNDER 200 RUSHING YARDS?

No.  But then again, Baylor — forced to its fourth string, emergency quarterback — all but abandoned the forward pass in the second half. The Bears rushed for 395 yards against a Texas team that was 1-6 when it gave up more than 200. Make that 2-6 now, for the season. Texas was minus linebackers Peter Jinkens and Malik Jefferson (and their combined 136 tackles, nine sacks and 16.5 tackles for loss). Johnny Jefferson (23 carries, 158 yards, one TD) dealt the most damage for the Bears, who were without the injured Shock Linwood for most of the game.

Yes. We think. Swoopes made it through without having to leave the game, though he was hobbled toward the end of the first half and didn’t look full-speed in the second half. Texas was hoping that Swoopes, who was making his first start since the season opener at Notre Dame, would play well enough so that Jerrod Heard, who suffered a concussion last week, wouldn’t need to be used. Swoopes did just that —  12 of 19 for 151 yards, 52 rushing yards and a pair of touchdowns. Swoopes wasn’t great, but was good enough.

DID DESHON ELLIOTT MAKE AN IMPACT?

No. Unless you count the video that started making the rounds at halftime showing Elliott removing his helmet and starting to shadow box during the bench-clearing moment of the first half. The last time we really saw him, Elliott was picking off two Kansas passes. He finished Saturday with four tackles.

Staff takes: All signs point to a big day for Briles, Baylor