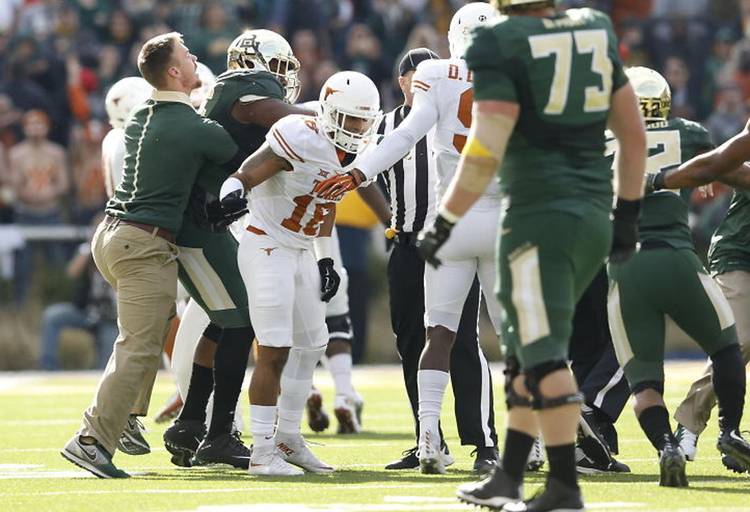 Baylor players clear the bench after a Texas penalty for unsportsmanlike conduct during the first half at McLane Stadium, Dec. 5, 2015. (JAY JANNER / AMERICAN-STATESMAN)

WACO — Had it been up to the initial participants, a melee involving Texas and Baylor would have never broken out.

Lynx Hawthorne, whose vicious slam of Texas cornerback Duke Thomas set off a benches-clearing spectacle, had simply wished to retreat to his sideline. Thomas wanted to stand up and celebrate his interception.

Yet neither party had a say in the matter and found themselves in the middle of a scrum that involved both teams, staffs trying to intervene, and even Waco police in full uniform.

Saturday morning’s all right for fighting? Why not. These programs aren’t friendly, and Texas’ stunning 23-17 upset will only stoke those embers.

“I didn’t feel like there was anything wrong with it,” Thomas said. “I wanted to go celebrate. I saw people ready to fight. I felt it was definitely exaggerated.”

Thomas, a senior leader, joked that his teammates came to his defense because Baylor “can’t mess with the O.G.” a street term that translates to “original gangster” or “old guy.”

It all went down at the end of the first quarter, after Texas sprinted to a 17-0 lead. Thomas, filling in at safety for the injured Dylan Haines, picked off a gimme from Hawthorne, Baylor’s emergency No. 4 quarterback, and found some space down the Texas sideline. Hawthorne cut him off and executed a body slam, angrily. Shoving ensued and Texas’ Kevin Vaccaro landed on Hawthorne and delivered what appeared to be an inadvertent knee to the back.

Credit Hawthorne for later bringing levity to the situation.

“I was like, ‘I should probably get out of here before they take care of the other quarterback.’” he said. “I remember getting up and just seeing the whole sideline coming towards me. And I was like, ‘That was not smart on my part. I should not have done this.’”

If punches were thrown, they weren’t caught on video, and the only penalty, unsportsmanlike conduct, was issued to Vaccaro for the knee to Hawthorne. Initially, observers mistook Vaccaro for quarterback Tyrone Swoopes, who shares Vaccaro’s No. 18 jersey. Swoopes insists, “I was on the bench.”

Longhorns DeShon Elliott and Caleb Bluiett removed their helmets, which should’ve incurred a penalty, and Elliott had his fists up inviting a scrap. Vaccaro and BU receiver Corey Coleman exchanged a shove or two.

“I was ready,” Bluiett said.

Asked who he’d pick on the team to back him in a fight, Thomas mentioned safety Jason Hall because he’s “probably the craziest person on the team.” Linebacker Peter Jinkens and guard Patrick Vahe, who were left home with injuries, would have given a Hall a run for his money. Baylor counters with a fierce tag team — 6 feet, 9-inch, Shawn Oakman, and 410-pound LaQuan McGowan.

All of this brought a new definition to Texas Fight.

For those who’ve paid attention to the rivalry, a fracas was not a big shocker. Two years ago, former Longhorns linebacker Steve Edmond called Baylor “trash” and was reprimanded by the Big 12. On Saturday, Edmond delivered a zinger on Twitter, asking the league “is it ok if I call em trash now?”

Texas coach Charlie Strong said that prior to the game Baylor players were chirping, which his players confirmed. Bluiett said most of the trash-talking came from Coleman, who he called “my boy” from many years ago. Not long after the first fight, Coleman got into it with P.J. Locke, but this time it remained one-on-one.

“It’s Baylor, they did the same thing when we were playing them last year,” Paul Boyette said about the pregame chatter. “It’s always gonna be a rivalry. Like Coach Strong said, guys at Baylor wanted to be recruited by Texas.”

Strong, concerned his players might break their hands throwing a punch, said he wished they would have walked away, but also “we’ll never back down.”

Baylor coach Art Briles said it “was not a scary situation at all.”

“That wasn’t bad,” he said. “I’ve been in a bad one. That’s in a mall. I’ve been in an alley. In a game. I’ve been in one in Hawaii. And if they get out of control, it doesn’t matter what the coaches are saying. You can’t stop it.”