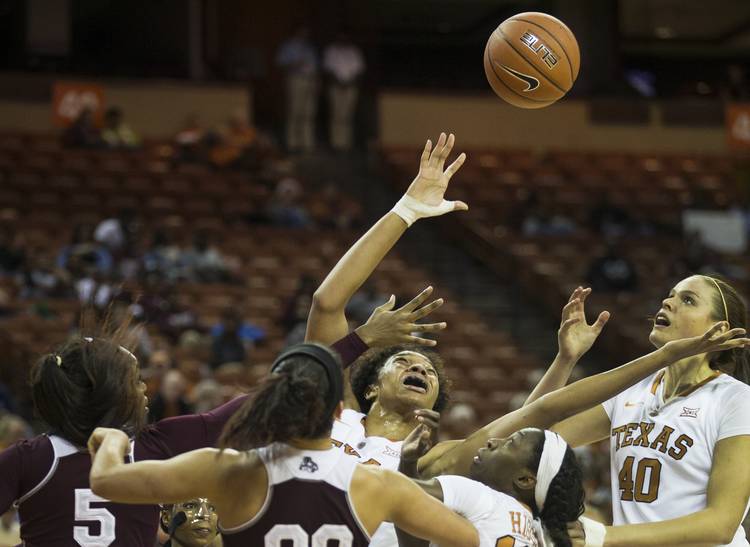 Texas' Imani Boyette and Kelsey Lang goes for the loose ball against Mississippi State's during the second half of an NCAA women's college basketball game at the Frank Erwin Center in Austin, Tex., Wednesday, Dec. 2, 2015. RICARDO B. BRAZZIELL/AMERICAN-STATESMAN

Sophomore guard Brooke McCarty scored a career-high 23 points, including 16 in the fourth quarter, and No. 6 Texas rallied from a 13-point deficit after three quarters to defeat Arkansas-Little Rock 66-56 on Sunday afternoon in Little Rock, Ark.

“Little Rock disrupted us for a long time, but we were able to get a couple of stops and a few points in the fourth quarter and settled in,” Texas coach Karen Aston said.

“We didn’t match up with them very well and we weren’t very connected defensively. We dug ourselves a hole, but we got a couple of stops and it got our energy going. We’ll grow from this.”

Little Rock (2-4) was led by 21 points from Sharde Collins, while the season’s leading scorer, Shanity James, finished with 12.

The Longhorns scored 15 unanswered points to start the final period. Texas took the lead, 50-48, on a jumper by Boyette at the 4:48 mark

Following a jumper by James that ended Texas’ scoring spree, the Longhorns then rattled off 10 consecutive points to take a 60-50 advantage with 1:15 left.

The Longhorns will next play host to No. 16 Stanford starting at noon on Sunday.