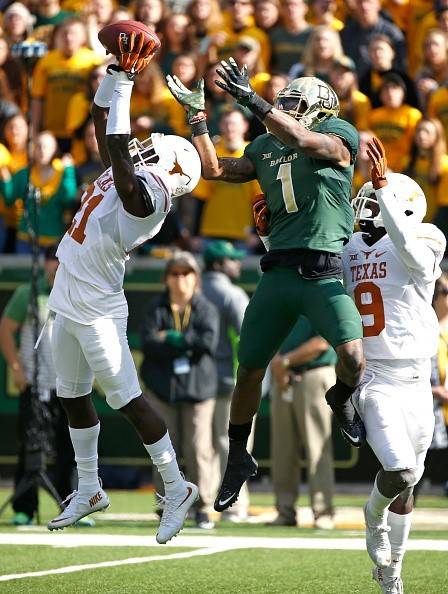 Texas cornerback Duke Thomas goes up for his first interception of the season against Baylor's Corey Coleman. (Photo by Jay Janner/AMERICAN-STATESMAN)

No one will mistake Texas’ offense for Clemson’s, but the schools are even in a somewhat obscure stat: plays of 40 yards or more.  The Longhorns increased their total to 18 on their first drive when Tyrone Swoopes flung a pretty lob downfield to Caleb Bluiett for a 57-yard score. That made it 7-0, marking the third game in a row Texas scored the first points (the other two were losses).

By the way, Clemson, the ACC champions and top-seed in the College Football Playoff, has played one more game than Texas.

Anything to spin a 5-7 record.

Already up 10-0, chances of Texas increased further after Baylor’s No. 3 quarterback Chris Johnson left with a concussion. It happened on a shot from P.J. Locke at the end of the first quarter and resulted in a fumble that UT’s Anthony Wheeler recovered inside of BU’s 20.

Three plays later, Swoopes made it 17-0 with a nine-yard run.

Baylor, which started the season 8-0, finished 2-3 after starter Seth Russell suffered a neck injury at the end of October.

3. More momentum, but no swings

Paul Boyette Jr. wasn’t so innocent after all. With a wry smile, Texas’ junior defensive tackle told reporters he was “on the bench drinking water” during the fracas at the end of the first quarter.

Video shows a different story, one where Boyette motions for Baylor players to come across the field for a fight and then joins the scrum.

Words were exchanged, helmets were removed, a 15-yard penalty was assessed against UT’s Kevin Vaccaro, but ultimately no one threw a punch.

It all started after Duke Thomas picked off his first pass of the season and was then slammed hard by Hawthorne near the UT sideline.

Most of the commotion, from Texas’ side anyway, came from three freshman defensive backs. P.J. Locke shoved Hawthorne while he was on the ground. Davante Davis shoved BU’s Corey Coleman after Coleman shoved Vaccaro. DeShon Elliott had his helmet off and his dukes up.

Credit Jay Norvell with some heady play-calling on a fourth quarter drive.

Twice, Norvell dialed up a pop pass on third down, and both times Swoopes converted to tight end Andrew Beck. The five minute, 35-second drive ended with a Nick Rose field goal, pushing the lead to 23-17 with four minutes to go.

Swoopes said Texas had never before ran that play, which called for Swoopes to pull back from a fake run and for Beck to take off to the flat.

Credit goes to fullback Alex De La Torre, who took out a rushers’ legs to clear a passing lane on the first conversion.

On the following drive, defensive tackle Poona Ford caused a fourth-down fumble by BU’s Johnny Johnson, and came up with the recovery.

BU scored on its three previous drives, and had Johnson held on, the Bears would’ve had first down near midfield.

Ford had a good game. In the first quarter he put his life on the line and went low to take out 410-pound ball carrier LaQuan McGowan. Luckily for Ford, McGowan fell forward and not on top of him.

Going into 2016, who is Texas’ starting quarterback?