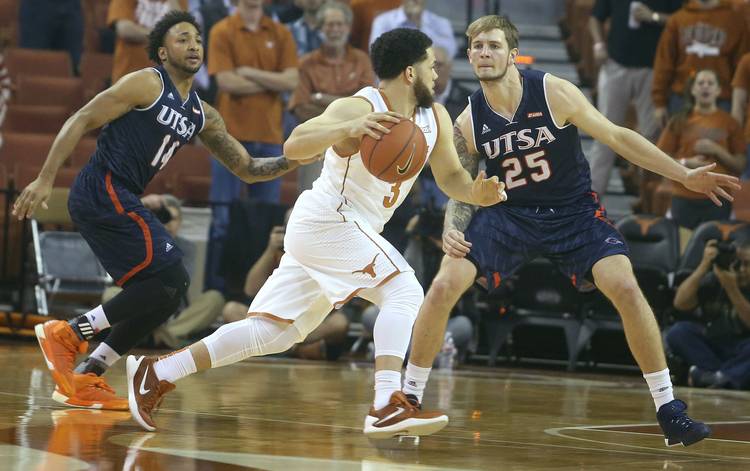 Texas coach Shaka Smart should really thank the thousands — hundreds? — of fans that braved the snarled Austin traffic and difficult parking situation to get into the Erwin Center on Tuesday. On a school night, no less.

Just when Christmas party season is getting ramped up, too.

Hey, give the two dozen or so UT students sitting in the vast, empty end zone section adjacent to the Longhorns’ bench a little credit. They stood silently, arms folded, like real diehards. Studying for finals is for suckers.

It’s not everywhere you can drink $8 beer and watch basketball practice. Texas spent two hours working on their press and shooting 3-pointers in a lopsided 116-50 affair against UT-San Antonio, a team that’s every bit as bad as its 1-8 record indicates.

The game was bad, but attendance was worse.

Texas officials now list the number of tickets distributed on the box score. The school stopped announcing the actual turnstile numbers two years ago. There were 9,657 tickets passed out for UTSA. The actual number of people who showed up was far, far lower.

At tipoff, the crowd inside arena was embarrassing, even for this fan base’s standards.

“That’s a heartbreaker,” UT senior Cam Ridley said. “To come out there for tipoff, not many people out there. We go to one of the biggest schools in the country and…”

Freshman Tevin Mack jumped in and said, “It’s kind of a downer.”

Come Saturday, things will turn more serious when Roy Williams and No. 3 North Carolina (7-1) roll into Austin. It’s assumed Texas fans will consider that matchup worthy of their time. UT officials have their fingers crossed it’ll be sold out. About 600 tickets remain.

Asked what he thought about Tuesday’s turnout, Smart said, “Kind of made the decision when the year started to focus on the stuff we can control.” Then, asked what can be done, Smart said, “Well, I’m new here, and I’m still getting a sense for that.”

Maybe it works in Smart’s favor if fans sleep on his team, now 5-3. Maybe the Tar Heels will, too.

Smart would prefer Williams stay blissfully unaware that UT’s freshmen are quietly gaining confidence. Tevin Mack finally coaxed the ball into the basket. He piled up 17 points and went 7 for 11 shooting. Kerwin Roach and Eric Davis combined for 25 points and went 5 for 8 from 3-point range.

Cam Ridley sure worked up a sweat. He had 19 points, nine rebounds and four blocks. His partner in the middle, Prince Ibeh, looked splendid in a sport coat on the sideline while nursing a sore lower back. Smart sounded like he expects Ibeh back against the Heels.

The Longhorns led by 39 at the break as the Roadrunners managed only 17 points in the first half. The best cheer came when Demarcus Holland warbled his way through “Jingle Bells” during a timeout video. “Yeah, I heard it,” Mack said. “It was terrible.”

The loudest outburst of the second half came when the walk-ons got in. Ryan McClurg scored four quick points and flexed. Danny Newsome cranked it up from downtown and celebrated by looking through one-handed three-goggles.

Maybe Smart can lure fans to the Erwin Center by promising they’ll meet the new offensive coordinator. Heaven forbid they come support a team that’s played in two NCAA Tournaments and will host a true basketball blue blood this weekend.

“When I first got to VCU, they always had pretty good crowds,” Smart said. “It was a really good following there for basketball, but we were able to create a higher level of interest. Now, they’re on a sellout streak that’s 70-plus games. It’s a smaller building, and this is a pretty big one.

“The biggest thing is to increase how difficult it is for opposing teams to come in here and play.”

Volleyball’s Erik Sullivan can play, but he’d rather coach