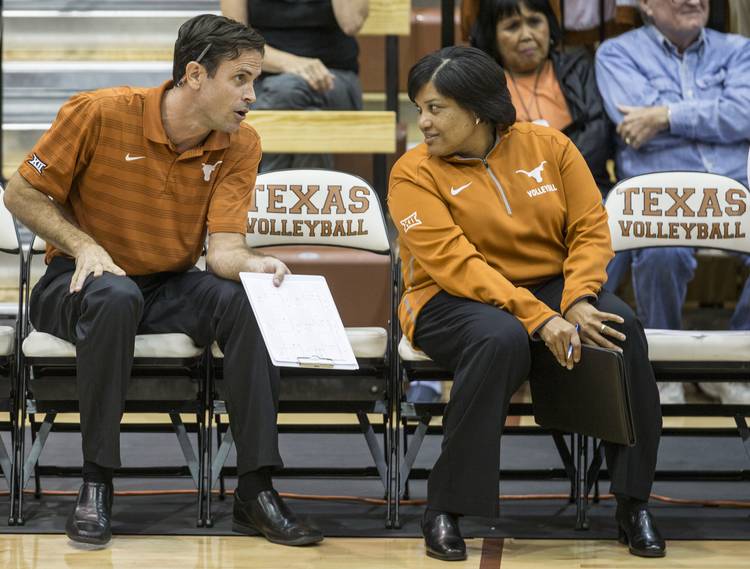 Texas Longhorns Assistant Coach Erik Sullivan, Associate Head Coach Tonya Johnson against The University of Arizona in the first half of the NCAA game on Friday Sept. 12, 2014 at Gregory Gym (RICARDO B. BRAZZIELL / AMERICAN- STATESMAN)

Erik Sullivan still enjoys stepping onto a sand volleyball court every now and then, but these days there isn’t much time for recreation for Texas’ assistant coach .

“Haven’t played at all this season,” Sullivan said.

For the moment, he’s preoccupied with a national tournament. Sullivan, a two-time U.S. Olympian, calls the shots on defense for No. 3 Texas, which will make its 10th straight regional appearance on Friday against Sullivan’s alma mater, UCLA. Sullivan has been around for half of the Longhorns’ 10-year run, and his record in five seasons on Jerritt Elliott’s staff is a remarkable 135-17 with three Final Fours.

Sullivan, 43, played eight years with the U.S. national team, serving as a co-captain for the 2000 Sydney Games and starting at libero in Athens in 2004. He retired to raise his children and to launch his coaching career, which has taken him to two other Big 12 schools, Colorado and Nebraska.

Once this season is over, you’ll likely see him at Aussies or another sand court playing high-level matches with former professionals.

“I like to go out and play, but it’s more to get exercise and enjoy it a little bit,” he said.

He hopes to put that off for at least another week, but top competition stands in the way of the Longhorns (27-2) advancing to the Final Four in Omaha. If Texas can get by UCLA, it will face No. 6 Wisconsin or No. 11 Florida on Saturday night. The Gators own a regular season win over Texas at Gregory Gymnasium, and Wisconsin is led by arguably the nation’s top setter, Lauren Carlini.

“It’s a tough regional,” Sullivan said. “We got a tough draw. I think we’ll approach it the right way and be completely focused on UCLA, but I think all the teams here could easily advance.”

During matches, Sullivan, clipboard in hand, constantly barks out assignments to his players and sits on the bench closest to the net while Elliott finds a spot at the end of the bench near the players’ area. Their roles are defined: When the opponent calls a timeout, Sullivan rules the team huddle and draws up defensive adjustments. When Texas calls timeout, Elliott and associate head coach Tonya Johnson do the talking.

Texas, of course, is rarely pushed into a timeout, so on many nights it looks like Sullivan is running the show.

“He’s a big reason why I came to Texas, because of the amount of knowledge he has with liberos,” sophomore Cat McCoy said.

Sullivan won two national titles with UCLA and twice was second-team All-America. Yet he said scheming against the Bruins this week isn’t taking him down memory lane; he graduated 20 years ago, when some of his players weren’t even born.

“That’s a long time ago,” Sullivan said. “I don’t know if there’s any special meaning for me. To be honest, I don’t really think about it that way anymore.”

Sullivan said UCLA is more physical than in past years, which could be trouble for Texas, which is small at several spots and does not feature a dynamic back-row attack. Six UCLA players earned Pac-12 postseason honors, matching a program record, and Taylor Formico was named libero of the year.

Elliott said the Bruins might be the nation’s top defensive team.

Sullivan said someday he’d like to be a head coach and that he fields “two or three calls” every offseason. Last year, he spoke with TCU, though it doesn’t appear much came of it. However, he said he’s in no hurry to leave a championship program at Texas or the city of Austin, where he and his wife are comfortable raising their children, ages 13 and nine.

“That’s somewhere in my future, but to be honest, we’re really happy here,” he said. “Coaching is one of those things you can get completely wrapped up in and you see a lot of coaches get divorced and don’t have good family lives. I’ve put a pretty big effort into balancing that out. That’s one of the reasons I came here. Jerritt gets it. He allows me to do that stuff.”