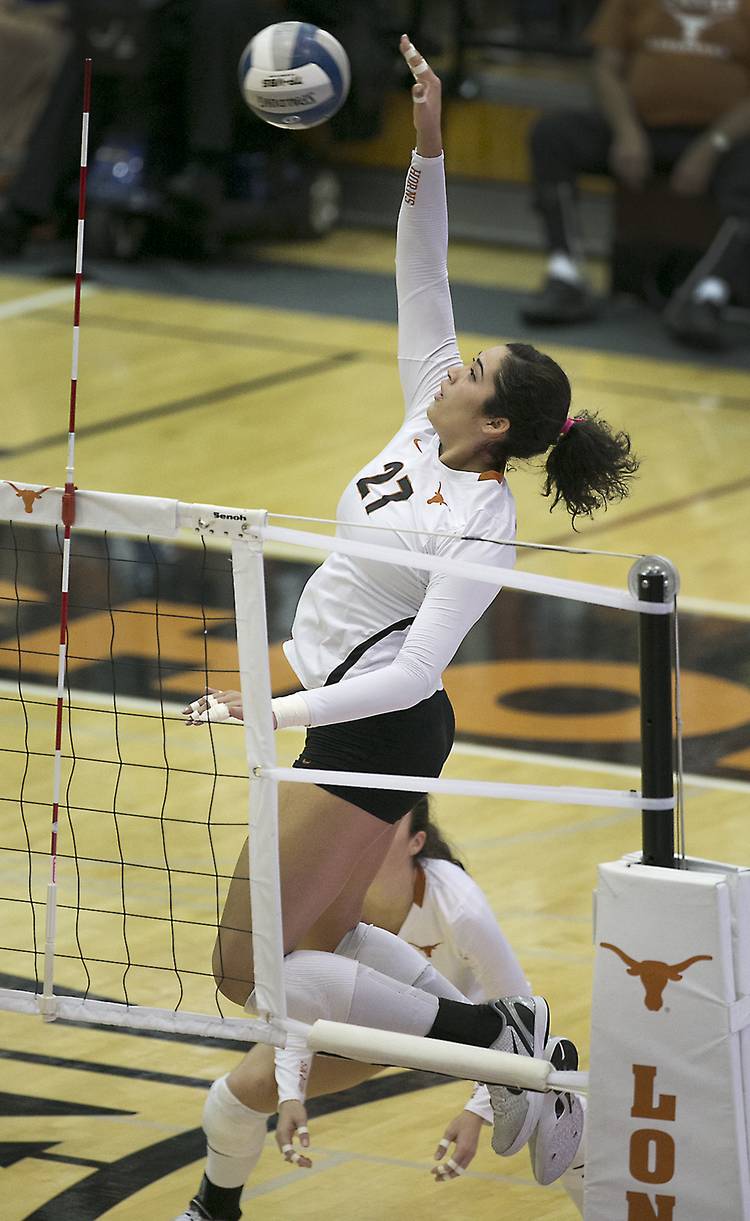 The way he tells the story, UCLA volleyball coach Michael Sealy was a victim of bad timing in the summer of 2013.

One of the top recruits in California, Yaazie Bedart-Ghani, was in Dallas for the Junior Olympics, and when it was over she took a drive with her family to Austin. She committed to Texas on her visit, spurning UCLA, her other finalist.

There are no hard feelings, says Sealy, whose No. 14 Bruins take on Bedart-Ghani and the No. 3 Longhorns in Friday’s regional semifinal at Gregory Gymnasium.

“It just so happened that year the Junior Olympics were in Dallas, so it was a nice easy trip to just pop up there, and that was it,” Sealy said. “But she got a great fit. I’m happy for her and her family.”

Bedart-Ghani, a member of the All-Big 12 freshman team, is coming off of what might be her finest collegiate match in last Friday’s four-set win over Purdue. With the Boilermakers directing their defensive focus on middle blockers Chiaka Ogbogu and Molly McCage, Bedart-Ghani, an outside hitter, responded with season highs in kills (nine) and attacks (21). All of this from someone who was more or less benched the night before against Fairfield because she was struggling.

“I knew in order for me to be on the court with these amazing players, I needed to step up my game,” she said.

On the season, the 6-4 Bedart-Ghani is totaling 1.44 kills per set with 47 blocks. She didn’t play much early, sitting out seven of eight matches at one point, but she’s been a fixture in the rotation for the past two months.

If Bedart-Ghani can put together another performance like the one she did against Purdue, that’ll mean UCLA, and possibly No. 6 Wisconsin or No. 11 Florida, could have their hands full accounting for all of Texas’ attackers this weekend. Purdue coach Dave Shondell will feel their pain. His game plan, which successfully slowed down some of Texas’ marquee net players, was shattered unexpectedly by a freshman.

“I think the luxury (Texas coach Jerritt Elliott) has with his team is they have three physical pin hitters and three physical middles,” Sealy said. “Most teams will have two or three threats, but the fact that all five kids are threat, you can’t leave anybody alone. They’re going to benefit from that for sure.”

Bedart-Ghani (pronounced Hani; the G is silent) was California’s Gatorade player of the year as a senior and was the nation’s No. 5 recruit by Prep Volleyball Senior Aces. In her first two years of high school, she attended Marymount High, which is literally across the street from UCLA. She spent her final two years at Redondo Union.

Bedart-Ghani’s club teammate, Zana Muno, is UCLA’s setter and is averaging more than 10 assists per set.

There is another fun story about Bedart-Ghani’s recruitment. At the end of her Texas visit, she and her parents were in Elliott’s office, but she was not ready to give her commitment to the Longhorns. Her parents felt highly of Elliott’s program, but wanted her to explore additional options. Then Bedart-Ghani asked Elliott to leave his office, something she now realizes is “something people don’t normally do.”

By the time Elliott returned, Bedart-Ghani had convinced her parents to let her commit.

“I loved her confidence and that she made the decision,” Elliott said.

Texas ramps up efforts to sell women’s team to fans