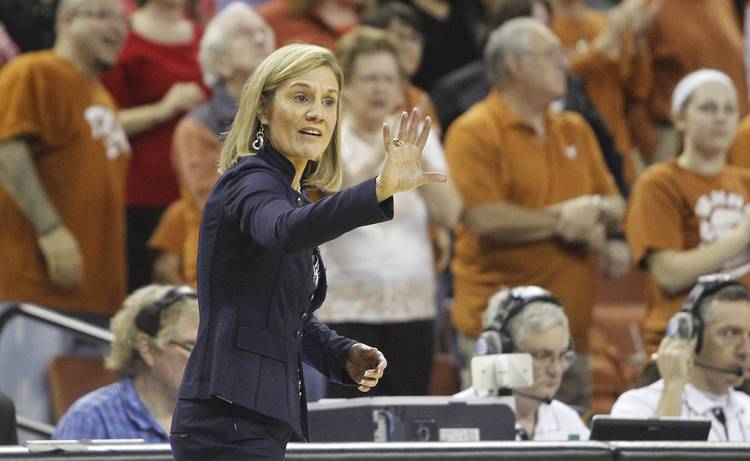 Fran Harris recalls a time when 8,000 or more spectators typically gathered at the Erwin Center to watch the Longhorns women’s basketball team.

Nearly 30 years later, fourth-year Longhorns coach Karen Aston is doing her part to re-establish Texas as a women’s hoops power. The Longhorns reached the Sweet 16 last season, have opened this season with a 7-0 record and recently signed the No. 2-ranked recruiting class in the country.

Now, will a fan base that dwindled to an announced 3,385 fans a game last season return to see a winning team on the court?

“When we become really cool and hot and the place to be again, selling the product is going to be easier to do,” said Harris, who played for Conradt’s championship squad in 1986 and became coordinator of community engagement for the Texas women’s program in August of 2014.

Harris directs a new initiative called “Paint The Town Burnt Orange.” She describes it as a “grass-roots” campaign to lure fans back to the Erwin Center “by any means necessary.”

While fifth-ranked Texas, which faces No. 14 Stanford at noon Sunday inside the Erwin Center, has seen its attendance drop steadily for 20 years, other women’s programs are thriving. South Carolina led the nation last season, drawing an average crowd of 12,293. The Gamecocks were followed by Tennessee (10,375), Louisville (9,515), Iowa State (9,289) and Notre Dame (8,544). Texas ranked 31st.

Harris, her team of marketing strategists and Longhorns coaches have pounded the pavement since September, “telling the story of Texas women’s basketball” to everyone they meet. They have gone to churches, elementary and middle schools, UT classes, meetings of civic groups and small businesses.

“I was talking to someone at Starbucks, and he said he’d read in the newspaper that the basketball team was doing well,” said Harris, who carries pocket schedules and team posters to distribute across the area. “Women’s basketball is built with personal touch. A grip-and-grin approach is what I do.”

Aston has often said that the successful of her team is paramount in getting fans to come out. This year’s team has done its part, beating No. 4 Tennessee and No. 9 Mississippi State in recent weeks.

The coach also has suggested that Texas play a game or two every year at old Gregory Gym, a cozy 4,000-seat facility that would create an intimidating atmosphere.

“We’ve got good fans, and they’re really supportive of us,” said senior point guard Celina Rodrigo. “It would be nice if we could just get more of them to watch us.”

Texas would love to duplicate the crowd of 7,582 fans who attended a victory over Northwestern State on Nov. 18. The players said they were energized by the roughly 5,200 elementary and middle school students who were on hand as part of UT’s annual “Forty Acres Field Trip.”

In contrast, the average crowd for the rest of UT’s home games this season has been 2,663.

Harris, who played for Texas from 1982-86, said she has leaned on Conradt for advice. Under Conradt, who became the Longhorns’ coach in 1976, Texas’ attendance peaked during the 1988-89 season, when the Longhorns drew an average of 8,148 fans per game.

“Jody said that to reach the people, you have to spread the gospel of Texas women’s basketball and everyone has to become an evangelist,” Harris said.

Harris equated her mission to that of the employees at Costco who offer samples of food to customers.

“Once I try their chicken on a toothpick, I’ve got to go back and buy the whole chicken,” Harris joked.

“With this, it’s like I’m trying to sell Texas women’s basketball on a toothpick.”

For UCLA volleyball, Texas’ Bedart-Ghani is the one that got away

All eyes on Shaka Smart: Texas hosts No. 3 North Carolina