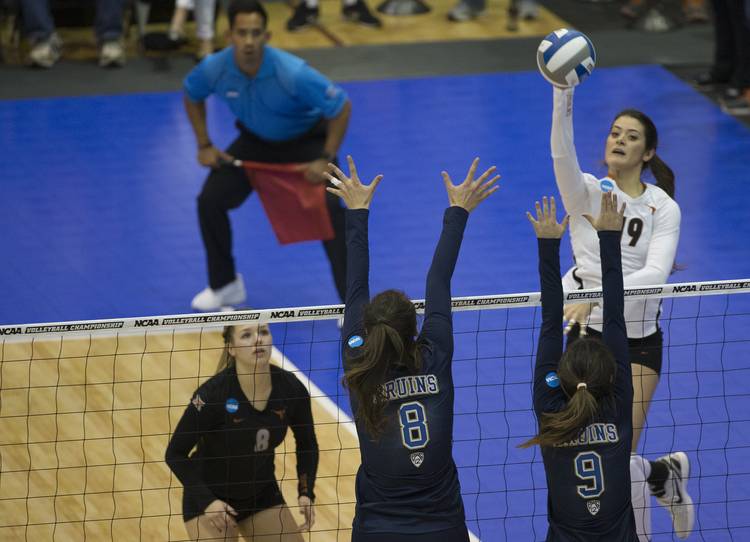 There was no way Amy Neal was going to get to the ball — until somehow she did.

A UCLA attacker found a vacant spot at the back left corner of Texas’ defense, destined to score a third-set point in Friday’s NCAA regional semifinal.

And then Neal heard her teammates yelling for her, and a thought crossed her mind.

“At this point, go for anything,” she said later.

Her right arm outstretched, Neal made a superb save to fuel a momentum-charging point. From there, Nicole Dalton set up Paulina Prieto Cerame for a kill.

Remarkably, this is the 10th year in a row the Longhorns have advanced to the Elite Eight of the NCAA tournament. The next stage figures to be their toughest yet this postseason, a rematch with No. 11 Florida from a September match the Gators took in four games at Gregory. It’ll get underway at 8 p.m. Saturday, and the winner will advance to next week’s Final Four in Omaha, Neb.

An announced crowd of 4,128 was as raucous as it’s been all year, particularly in the final two sets when Neal, Prieto Cerame and Chiaka Ogbogu overwhelmed UCLA’s blockers. And don’t forget middle blocker Molly McCage, who more often than not did damage when she slid to the outside for an attack.

Texas coach Jerritt Elliott sensed UCLA was on the ropes early in the fourth game so he waved his arms to encourage more crowd noise. Ogbogu delivered a service ace, bringing even more noise, not to mention a 9-5 lead.

“We have the best fans in the nation,” Ogbogu said.

Texas is getting to host a regional because it secured a bid to do so back in 2012. Is it an advantage? Better believe it.

“The fire marshal’s gotta come in here and back these people up,” UCLA coach Michael Sealy said.

Sealy’s team delivered its hardest shot out of the gates, taking game one behind eight kills from Jordan Anderson, a Texas native from Flower Mound, and some defense that Elliott had said previously might be the best in the nation. Texas had zero blocks in the game, and Elliott called his players “islands” because they weren’t unified and battling for each other.

“They put a lot of pressure on us with how well they dug the ball,” Elliott said.

Game two was also up for grabs, tied 20-20 after a kill by UCLA’s Claire Felix. Kills by Ogbogu and Prieto Cerame preceded a bad set by UCLA’s Jennie Frager, and the Bruins called timeout trailing 23-20. The final two points for Texas came from Ogbogu and on a service ace by Kat Brooks, whose attempt brushed the top of the net and dropped for the win.

Set three was a laugher, so much so that Sealy joked that he conceded victory in a team huddle when the Bruins were trailing “14 to negative-three.” Though that score may be impossible, they did hit a negative number in the game (-.103).

For Texas, Neal had 18 kills on 58 swings. Ogbogu had 13 kills and eventually stepped up defensively and finished with four blocks. Prieto Cerame had 12 kills, and McCage nine.

Now it’s onto Florida, which has scored a win over Texas at Gregory in each of the past two seasons. The Gators nearly gagged in their match on Friday, blowing a 2-0 set lead to Wisconsin before rebounding to take the fifth. Spearheaded by front row threats Rhamat Alhassan (6-4) and left-hander Alex Holston (6-1), Elliott believes Florida is the most physical team still remaining in the tournament and noted “they have a lot of matchup problems” for his squad.

Texas’ best plays of 2015: Our list is definitely freshmen-friendly