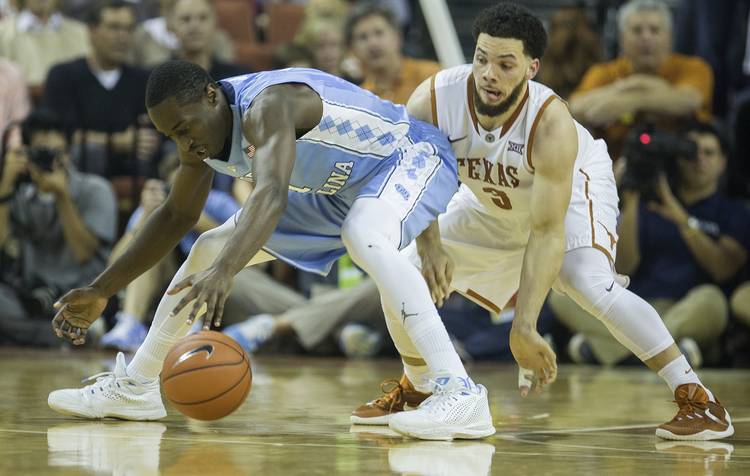 Texas guard Javan Felix tries to get the ball from North Czarolina's Theo Pinson during the second half of an NCAA men's college basketball game at the Frank Erwin Center in Austin, Tex., Saturday, Dec. 12, 2015. RICARDO B. BRAZZIELL/AMERICAN-STATESMAN

Last Saturday, Texas bumped off third-ranked North Carolina in front of a sold-out Erwin Center. Then on Monday, the Big 12 named Javan Felix its co-player of the week and Eric Davis the newcomer of the week.

As if that wasn’t enough, the Texas men’s coach got some huge news Monday afternoon.

Five-star guard Andrew Jones, who sat beside the UT bench during the weekend upset, told the UT staff he was committing to the Longhorns, according to a source familiar with the decision. The 6-foot, 4-inch Jones from Irving MacArthur is widely considered one of the best point guard recruits in the nation for the 2016 class.

Texas (6-3) must keep all that positive mojo flowing into Tuesday’s home game against Appalachian State (2-6).

“Over the past couple months, since the end of July, I’ve built a strong relationship with coach Smart,” Jones told recruiting website Scout.com. “It was to the point where we were texting every morning. He was sending me motivational quotes about how to be a leader and how to stay positive.”

“We would also exchange diagrammed plays and would send me plays that we could potentially run next year and how I could easily score,” he added. “We (have) just become very close on a personal level.”

Jones’ father, David, told the American-Statesman that Andrew raved about the amount of texts and communication he received from Smart and the assistant coaches. That’s how Smart connects with all his players. He is known to carry on multiple texting conversations at one time.

“One thing about these kids these days, the way they stay connected is texting,” said David Jones, who was excited his son chose a school close to home. “You text, they’ll answer that a lot faster than they will (by) you picking up that phone.”

Since Jones has not signed a letter of intent, Smart cannot talk about his new recruit. However, Jones’ commitment is a sign that Smart’s recruiting efforts are starting to pay dividends.

“It’s great for people to see the way we want to do things, people can see the atmosphere in the Erwin Center, people to see us beat a high, high opponents like that,” Smart said Monday.

Felix’s buzzer-beater was a big reason why he was named co-player of the week, along with Iowa State’s Jameel McKay. Felix had 25 points, three shy of his career high, and went 5 for 7 from 3-point range.

Davis’ confidence continues to grow by leaps and bounds. He had 16 points against the Tar Heels and went 4 for 5 from 3-point range.

Are Sterlin Gilbert, Matt Mattox ready for Texas? ‘Without a doubt’