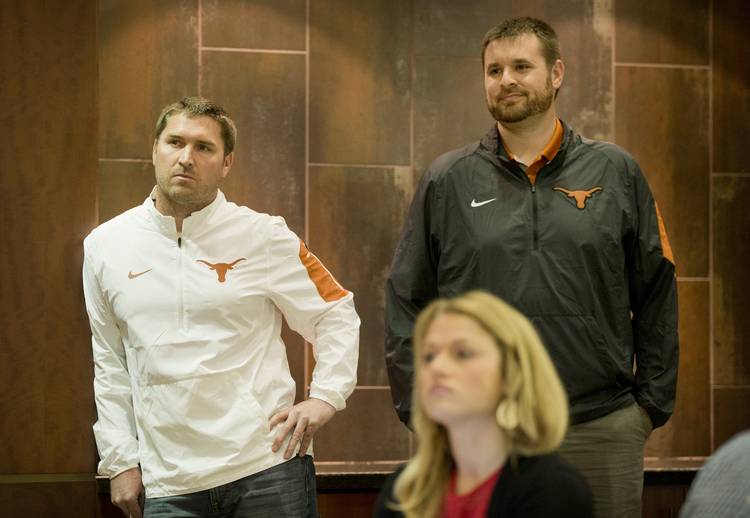 To understand how the sausage will be made at Texas, one must first understand the relationship between the coaches who’ll be making it.

First and foremost, Sterlin Gilbert and Matt Mattox are friends. To call them work associates, though maybe accurate, discredits the amount of time the two spend together away from the office doing stuff like, well, making sausage.

“Every now and then we’ll put some meat on the smoker and have a good time,” Mattox said.

If Gilbert’s handling of quarterbacks mixes well with Mattox’s power blocking schemes — and their three seasons together at Tulsa, Bowling Green and Eastern Illinois suggests it will — Texas fans can expect a meal tastier than the slop offered by their predecessors, Shawn Watson and Joe Wickline.

On Monday, the new guys were introduced by head coach Charlie Strong to the local media and conveyed their collective vision for modernizing an offense that has fallen behind the Big 12’s premier programs.

Gilbert gave off the vibe of a stereotypical Texan, decked out in blue jeans and boots and wondering aloud whether the accent he’d acquired in West Texas (San Angelo) is thicker than that of tight ends coach Jeff Traylor’s of East Texas (Gilmer). Gilbert kept his responses short and declined to answer a question about the state of the Longhorns’ quarterbacks because he had yet to evaluate them on film.

Asked if he and Mattox are a package, Gilbert, 37, said it wasn’t “a cow-calf deal, but it was a huge part of us being here.”

Mattox, 33, was gentle, his soft voice at odds with the 6-4 frame he carries as a former offensive lineman at Houston. He said he’s big on positivity, which will be a departure from the past two years under Wickline, who once softened a compliment to his linemen by adding “but you still suck.”

Though something of an odd couple, the new guys, not unlike Lady Gaga and Tony Bennett, have set aside any differences and combined to make beautiful sounds. Well, beautiful to everyone except for Baylor’s Art Briles, who compared Texas’ raiding of the offense he designed to identity theft. Briles’ uptempo system has produced the nation’s first or second-ranked offense in each of the past five seasons and has also succeeded at Eastern Illinois and Bowling Green (both under Dino Babers) and Tulsa (Philip Montgomery).

It was Briles, then of Houston, who gave Gilbert and Mattox their first college coaching jobs in 2005, and who Gilbert said he spoke with extensively last week before accepting Texas’ offer. During the same season Vince Young high-stepped over USC, Gilbert, a graduate assistant, and Mattox, an assistant strength coach, were just a couple of broke college students trying to scale the coaching ranks in Conference USA.

“A good thing social media wasn’t really going on back then,” Mattox said. “We didn’t have the issues these kids have today with that type of stuff.”

They also didn’t have the money they’ll be bringing in at Texas. Both agreed to three-year deals, Gilbert for $850,000, Mattox for $550,000. It’s believed Gilbert fought hard for Mattox to get a competitive salary, which was among the many matters discussed on Friday when Strong and athletic director Mike Perrin accompanied UT President Gregory L. Fenves on an impromptu flight to Tulsa to meet face to face with Gilbert. Earlier in the day, Gilbert had turned down the Texas job over compensation.

Asked about Fenves’s rebuttal, Gilbert said, “It was about commitment.”

As is his relationship with Mattox, whose two young daughters and wife have become something of kinship to Gilbert, who is unmarried.

“My girls love seeing him come over,” Mattox said.