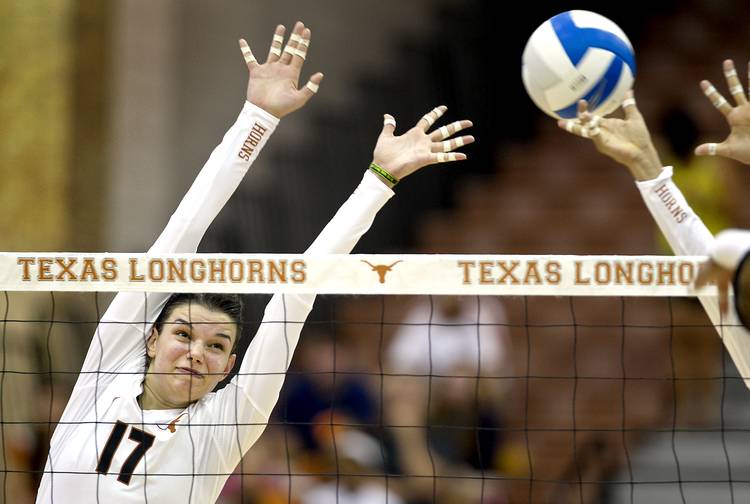 There was a time when Mirta Baselovic wondered why her jokes kept falling flat around her Texas volleyball teammates.

Baselovic, a second-year player from Split, Croatia, fit in just fine in her new surroundings, but sometimes her foreign one-liners failed to clear the net.

“Things that were funny to me in my language weren’t exactly funny here,” Baselovic said.

Baselovic eventually figured out what worked and ditched what didn’t, and she now has Cat McCoy’s vote for the team’s funniest player.

The unlikely star in Saturday’s regional final win over Florida, Baselovic will bring more than comedic timing to Omaha for this week’s NCAA Final Four. The understudy to All-American middle blockers Chiaka Ogbogu and Molly McCage, Baselovic, a sophomore, is waiting in the bullpen while fulfilling a major role as a substitution blocker — something she displayed wonderfully with an emphatic stuff of Florida star Rhamat Alhassan to break a fifth-game tie.

“I think she’s the best blocker on our team,” Big 12 player of the year Amy Neal said.

Best blocker. Funniest teammate. Some girls have it all.

Consider the challenge Baselovic was up against facing Alhassan, a 6-4 All-American who can leap small buildings. Tied 13-13, Elliott pored over some “calculated percentages” and chose to replace McCage, an All-Big 12 first-team selection and Texas’ all-time assist block leader with Baselovic, who has appeared in about half of Texas’ 107 games.

Baselovic went over the game plan in her mind. If the pass was good, the set was going to Alhassan.

“Jump with her,” Baselovic said.

As everyone went bananas around her, Baselovic stood expressionless, cold-blooded. McCoy called her a “stone-cold killer.” The one with the sly comments is now on the receiving end of them.

“The game wasn’t over,” Baselovic said. “It wasn’t time to celebrate yet.”

If all goes well, it’ll be a busy week for the Longhorns, who are making their fourth straight Final Four appearance and — this statistic is just plain remarkable — seventh in eight seasons. Baselovic’s mother and sister were in Austin for regionals and stuck around and will follow the team to Omaha. Baselovic’s childhood friend, a Croatian who plays for UTSA, also was among the 4,273 fans in attendance at Gregory Gymnasium for the Florida match.

On Wednesday, the Longhorns, whose senior class would like to add a second NCAA title, will practice at CenturyLink Arena in preparation for Thursday’s semifinal against No. 2 Minnesota. After an off day Friday, the championship will played on Saturday.

If they get their wish, Texas players will face off for a third time with Kansas, the Big 12 runner-up for whom the Horns say they have great admiration. The No. 9 Jayhawks, who first must get past No. 4 Nebraska, suffered their only two losses to Texas, including a five-setter in Lawrence on Nov. 11 that for all practical purposes settled the conference title.

On Dec. 21, two days after the championship match, Baselovic will head back home to Croatia. She plans to sleep off a long season and is excited to eat fish from the Adriatic Sea. The octopus available to her in Austin isn’t to her standard.

While Texas was recruiting her, Longhorns coach Jerritt Elliott arranged for Baselovic to visit with Mira Topic, a 2002 All-American at Texas who also is from Croatia. Baselovic said Topic’s assurance that she’d enjoy her experience in Austin had “a big influence” on her decision.

“Our team loves her,” Elliott said. “She’s the one that gets our practices going ‘cause she can be a little snippy.”

She revealed some of that snip the other day when she was asked about her transition to American culture and whether she had acquired a passion for American football.

“I prefer good, ol’ famous European football — the real one,” she said.