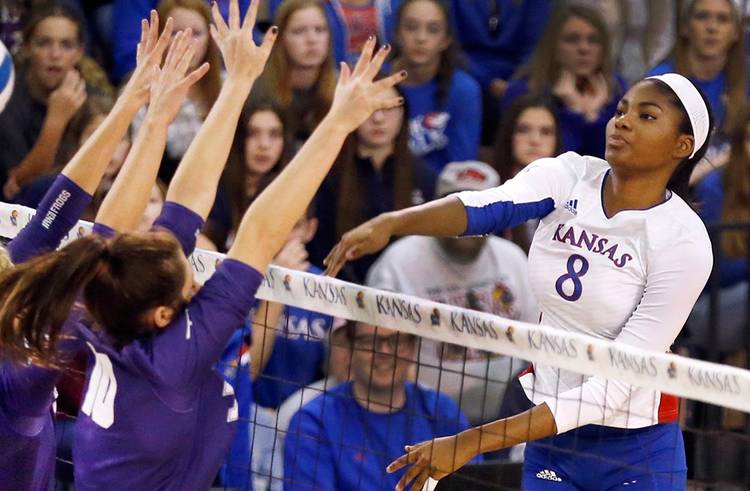 All-time, the Jayhawks are 0-86-1 against Nebraska, their semifinal opponent that will get an added jolt by playing Thursday’s match in front of a Cornhuskers-partisan crowd at CenturyLink Center.

But Kansas is not alone in enemy territory. Texas vows to have the back of its Big 12 brethren.

The admiration for Kansas is built out of respect. Elliott said he’s “very tight” with Jayhawks coach Ray Bechard. Last week Elliott sent a video of the Texas staff celebrating Kansas’ comeback win over top-seeded USC. Trailing 13-9 in the fifth game, Kansas rattled off the final six points for a finish that was even more stunning than Texas’ thrilling five-game win over Florida earlier in the night.

Elliott, who knows a thing or two about coaching in a Final Four, even helped Bechard with an itinerary.

The players also get along. Texas’ Amy Neal fired off congratulatory text messages to Kansas’ Kelsie Payne (Connally High School) and Madison Rigdon (Pflugerville) and complimented them on their proper representation of the Austin Juniors club team that Neal, of Lake Travis, was also a part of.

“They all texted us and tweeted at us and told us congratulations and how excited they were for us,” Payne said. “It’s awesome they can be here too, and we can experience this all together.”

Texas won both regular season meetings against Kansas, dominating in Austin but needing five sets to win in Lawrence. The Jayhawks are otherwise unbeaten.

The one that got away: Elliott is among the nation’s elite recruiters, but even he makes mistakes from time to time such as not offering a scholarship to Payne, who was named a first-team All-American on Wednesday.

“We knew she had the talent to be extremely good,” Elliott said. “That was always our position. At the end of the day, I made a miss, and that’s not the first one I made a miss on. She’s a great player playing for a great coach at a great program, and it’s good to see her succeed. I don’t regret any part of it. I think she’s happy, and I wish her the best of luck.”

Payne, a sophomore, seems content with how everything worked out.

Chiaka Ogbogu made first team for the second year in a row, and was joined by Neal. Making second team was Paulina Prieto Cerame, while Molly McCage and Chloe Collins landed on the third team.

Texas’ five selections is most in the nation.

“There’s only one ball to go around, and when you have five All-Americans, it’s pretty special,” Elliott said. “We’re utilizing more personnel on a consistent basis instead of overloading certain players.”