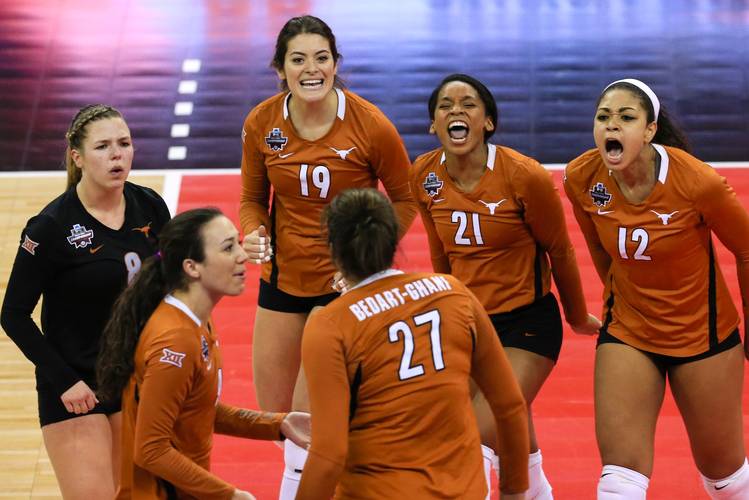 OMAHA, Neb. — Having hoped to play another Big 12 team for the national championship, Texas has to settle for something close when Kansas was eliminated in Thursday night’s semifinal.

That consolation prize is Nebraska, an original member of the Big 12 whose rivalry with Texas never truly dissolved even after the Cornhuskers escaped the Longhorns’ outsized shadow and left for the Big Ten in 2011.

Though their respective athletic departments and communities have had their differences, the volleyball teams, led by Texas’ Jerritt Elliott and Nebraska’s John Cook, have remained in touch because, well, why not? There’s mutual respect and it promotes good things for the sport.

“I think it’s one of the great rivalries in college volleyball,” Elliott said Friday, a day after his team took down Minnesota in four sets. “I think the Nebraska fans are very well-educated. I think they are one of the programs in the country that does it right and they have invested a lot of money into it and grown their fanbase.”

Saturday’s final (6:30 p.m., ESPN2) will be the fifth meeting between the teams in the five seasons since Nebraska’s departure. Texas has claimed the previous four, and lately, the Longhorns have dominated the series winning nine of the last 10 meetings, including a five-setter in September at Gregory Gymnasium.

The eyes of Nebraska are upon you.

Regardless of the outcome, this rivalry will continue after Saturday, as both teams are committed to three more years of playing in the four-team VERT Challenge with Oregon and Florida.

“We have a lot of respect for Texas and they are fun to play,” Cook said. “But people in Nebraska do still get worked up about Texas. I think it’s in the DNA.”

Cook’s team has long had designs of advancing to this year’s Final Four, which is being played about an hour from Nebraska’s campus. After losing in the regional final each of the past three seasons, the Cornhuskers broke through with a 3-1 win over Washington last week and followed with another 3-1 win over Kansas in Friday’s semifinal.

Texas players said they had hoped to play Kansas, but the Jayhawks were overwhelmed in their first Final Four appearance, hitting below .200 in three of the four sets. Nebraska got big nights from Kadie Rolfzen (14 kills, .343) and Justine Wong-Orantes (17 digs).

Texas, the No. 3 seed, will be the home team in name only. Its cheering section figures to be a burnt-orange blip amid a red sea at the 17,560 capacity arena that is located in the same downtown vicinity as TD Ameritrade Park, the home of the College World Series. Outside hitter Amy Neal said she embraces being in enemy territory, something many of Texas’ players are familiar with from playing at Nebraska’s 13,595-seat Devaney Center in 2014 and 2013.

“They will be all over us, but I think we embrace that,” Neal said. “I don’t think they will be causing us to have too much pressure. I think we’ll just want to play. I think it gets us fired up.”

Whatever happens, the match is not likely to take on the same appearance as Texas’ earlier win over Nebraska when Ebony Nwanebu took 54 swings — 23 more than anyone else on the team. The next day, Nwanebu could hardly move and was shut down for the season. It was the only match she appeared in all season.

In Nwanebu’s absence, freshman Yaasmeen Bedart-Ghani has risen to a star level, and was the most dominant player in Friday’s semifinal when she put together 15 kills on 24 swings (.583). Bedart-Ghani did not play in the first meeting with Nebraska.

Elliott had good news to report on middle blocker Chiaka Ogbogu, who left in Thursday’s fourth game with leg cramps and did not return.

“She went through practice today,” Elliott said. “We limited some of the stuff that she did, but we feel like we can get her back. We’re confident.”

Longhorns hurting after season ends with championship loss to Nebraska