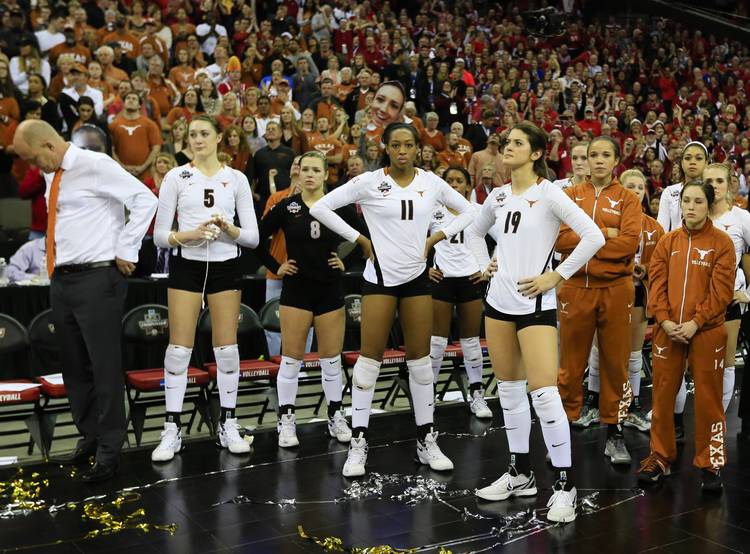 OMAHA, Neb.  — They hugged, they slapped hands, and when it came time to sing the Eyes of Texas, the Texas volleyball team gave it everything they had.

Yet there were tears, plenty of them, the type that signify the pain of falling short on the biggest stage.

But regret? Nah. There were no tears of regret.

“I regret nothing with this group,” senior outside hitter Amy Neal said. “They’re incredible and the best team I’ve been a part of.”

On this night, though, Texas’ star-studded lineup was not good enough to beat Nebraska, which acquired energy from the largest crowd to ever watch an NCAA volleyball match and swept the Longhorns, 25-23, 25-23, 25-21, Saturday night at CenturyLink Center.

The championship is Nebraska’s fourth and its second over Texas, including a win in 1995.

This was unexpected. Maybe not the result, but certainly the quickness with which Nebraska dispatched Texas, the No. 3 seed which had won nine of the previous 10 meetings between the former Big 12 rivals.

Name it and it went wrong. Nebraska hit over Texas’ blocks, shut down star middle blocker Chiaka Ogbogu, and forced the Longhorns to break out of their system at an alarming rate — something Nebraska coach John Cook predicted a day earlier would be key.

There were untimely service errors — five in game one — and miscommunications on defense. Easy points? Forget it. Nebraska was clean and crisp, committing just 12 errors to Texas’ 17.

In the locker room before game three, Texas coach Jerritt Elliott said he told his team to stay composed because the Huskers were “playing out of their mind.”

“I thought they played phenomenally,” Elliott said. “I bet John would say this is as good as they’ve played consistently all year long.”

Clearly, the crowd was a factor. Comprising the 17,561 that turned out to the downtown arena were coaches, impartial fans, and a few hundred Texas supporters that were loud and proud. But mostly, they wore red. And they were so loud that at one point, Nebraska’s Kelly Hunter said she thought her ears were going to pop. A homemade sign held by one young fan told Texas players that if they wished to have a soft serve, they should “go to DQ.”

“Nebraska fans were fantastic,” Elliott said. “When we arrived today, they were three-deep and telling us good luck.”

For Texas, Neal and freshman Yasmeen-Bedart-Ghani made the all-tournament team. Those two represent all that’s right in the program, both now and in the future. Neal, who had 10 kills and hit .167, checks out along with McCage and Kat Brooks as the winningest class in program history, registering a mark of 113-13.

“I wish I was not a senior,” Neal said. “I wish I had more time with this team.”

Instead, she’ll pass the baton to Bedart-Ghani, who had a mammoth Final Four, recording 15 kills against Minnesota and 11 more against Nebraska. In both matches, she hit .500 or better.

She was so valuable, in fact, that Elliott slid her over in game three to match up against freshman outside hitter Mikaela Foecke, the tournament’s most outstanding performer. Foecke’s production slid off a bit from that point forward, dipping from .556 to .385.

“She was the difference-maker in the match and we didn’t have an answer,” Elliott said.

The Huskers’ net play was stout, contributing to eight blocks to Texas’ five. They made it hard on Longhorns’ second-team All-American Paulina Prieto Cerame, who got hot at the end of the first game but ended up hitting just .114 with 11 kills.

For all practical purposes, the Longhorns’ championship hopes were dashed when they couldn’t close out the second set. Trailing 20-17 after a Foecke kill, Elliott called time out. At that point, three Nebraska players were hitting .600 or better. Out of the break, Neal threw down a couple of kills, and Bedart-Ghani followed with one of her own. After a Nebraska player was caught in the net, Texas led 21-20.

Elliott said he had hoped to reach a point where Nebraska players were doubting themselves, and this looked like it could be it.

Then Cook called time out, and Nebraska grabbed four of the next five points to regain momentum.

“They gave me everything they had tonight,” Elliott said. “It’s just sad and hurts for me to see the tears in their eyes and the relationships that have to come to an end in terms of the season.”

It’s the third runner-up finish for Texas, which also had championship losses in 1995 and 2009.

Another Final Four season down, Texas volleyball points toward 2016