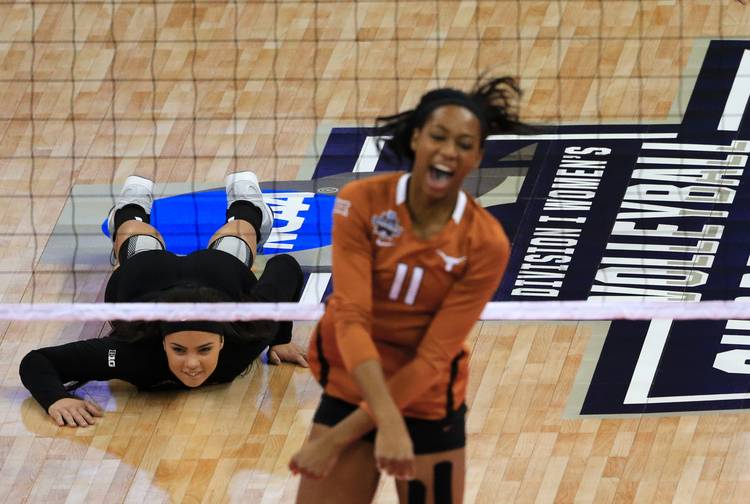 There is a theory among volleyball people that for all of Texas’ trips to the Final Four — seven in the past eight seasons — one national title is not enough to show for it.

Whether that criticism is fair, ridiculous, or somewhere in the middle, this year’s runner-up showing should be free of harsh judgment.

By all appearances, Texas overachieved. Head coach Jerritt Elliott made that much known to anyone who would listen during Texas’ charmed run to last Saturday’s championship match loss in Omaha, where the Longhorns encountered a lethal combination of Nebraska players performing in front of Nebraska fans. In the post-match press conference after the 25-23, 25-23, 25-21 loss, Elliott seemed at ease, aware, once again, that his team had squeezed every last drop out of the season.

“They have got some magic between them about what they were able to do,” Elliott said.

Many thought this would be a rebuilding season for Texas — and that was before two of the Longhorns’ top newcomers succumbed to season-ending injuries early in the year.

In addition to replacing multi-year All-Americans Haley Eckerman and Khat Bell, who are both now playing professionally overseas, Elliott’s staff had to offset injuries to transfer Ebony Nwanebu and star recruit Micaya White. Together, they played in only one match — when Nwanebu dominated Nebraska in a five-set Longhorns win in early September.

The task looked to be daunting, but Elliott was confident his returning players would make improvements to their game to help pick up the slack. His confidence was well-founded.

Amy Neal, an undersized outside hitter, developed a consistent attack and a punishing jump serve and earned Big 12 player of the year honors. Paulina Prieto Cerame, a second-team All-American, began to take over matches from her spot on the outside. Setter Chloe Collins edged Nicole Dalton for the starting job in the preseason and became a third-team All-American. All-Americans Chiaka Ogbogu and Molly McCage, already a dominant 1-2 punch in the middle, continued to pose matchup problems. Defensive specialists Kat Brooks and Dalton, and libero Cat McCoy, controlled the back row.

And like that, Texas won 30 of 33 matches, clinched its fifth straight Big 12 title, and advanced to the Final Four for the fourth year in a row.

“This team, more so than any team that I’ve ever coached, took me for a ride,” Elliott said. “They instilled confidence in me, made me believe in them. I really didn’t have to do too much with this group in terms of managing them. They did it on their own. They made me believers. … So at the beginning of the year, I would have said, on paper, no, we wouldn’t be in this position. Not even close.”

Now begins preparations for 2016. Texas will again be favored to win the Big 12, but watch out for Kansas, which returns first-team All-Americans Kelsie Payne (Connally High) and Ainise Havill from this year’s Final Four team. Next year’s Final Four is in Columbus, Ohio.

Texas will say goodbye to the winningest class in program history. Neal, McCage and Brooks, who were freshmen on Texas’ national championship squad of 2012, went 113-13 in their careers. It’s difficult to quantify the value of their leadership, but the seniors delivered. McCage was the most vocal of the group, often leading team discussions during timeouts. Neal and Brooks were always even, never getting too excited or too stressed. The three seniors were inseparable, roommates each of the past four years.

“I wish I was not a senior. I wish that I had more time with this team,” Neal said after Saturday night’s loss. “I think that not only the volleyball part, but besides that, just the relationships I have with these players is incredible. And the bond we had with our coaches was different than any other year that I’ve been here. The amount I’m going to miss them is insane. The thing I’m going to miss the most is just how much fun I had with them.”

Likewise, Texas will miss its seniors, but frankly, the Horns will get by just fine. In 2016, Elliott will turn over the program to Ogbogu, Prieto Cerame, Collins and Dalton, and cross his fingers that Nwanebu and White show no lingering effects of their injuries. Yaasmeen Bedart-Ghani, a freshman who made the Final Four’s all-tournament team, looks ready to be a star.

Longhorns hurting after season ends with championship loss to Nebraska

Joe Jamail on athletics: Texas has ‘400,000 people’ who became coaches